The field is set for round 11 of Monster Energy Supercross. The stage is set for the 11th round of the 2022 Monster Energy Supercross season with Eli Tomac and Jett Lawrence topping qualifying from Lucas Oil Stadium.

A soft racing surface in Indianapolis provided plenty of action as the riders took to the track for qualifying ahead of tonights program, showing promise for an exciting night of racing.

The top spot in 450SX went back and forth between multiple riders as the final session came to a close, with Tomac setting the fastest lap of the day with a 43.041s lap time. The Monster Energy Star Racing Yamaha rider continuing his momentum on the back of three consecutive wins.

Jason Anderson bounced back after a DNF last week in Detroit to set the second fastest lap time of the day aboard his Monster Energy Kawasaki, besting Malcolm Stewart (Rockstar Energy Husqvarna) who rounded out the top three.

Another rider who had a tough night in Detroit was Chase Sexton, the Team Honda HRC rider surfacing in Indianapolis stating he was 100 percent fit, setting the fourth fastest lap of the day with a 43.459s laptime.

Podium finisher from last week Justin Barcia put his TLD Red Bull GasGas in the top five in today’s qualifying as he searches for his first win of the season tonight in Indiana.

Dean Wilson (Rockstar Energy Husqvarna) was sixth fastest and the first rider in the 44s range, besting Cooper Webb in seventh who returns to the track after retiring early in Detroit in a crash with Sexton. In 250SX East action, Jett Lawrence continued his dominant run in qualifying sessions this year, topping the timesheets with a 43.826s lap time aboard his Team Honda HRC machine.

His main title rival Cameron McAdoo was second fastest with a 44.060s laptime, finishing just ahead of Pierce Brown (TLD Red Bull GasGas) in third, who is continuing to build momentum this season.

Rj Hampshire (Rockstar Energy Husqvarna) was fourth fastest on the day with Enzo Lopes (Muc-Off FXR ClubMX Yamaha) rounding out the top five as the first rider in the 45s range.

Jordon Smith who has shown quite a bit of speed aboard his FirePower Honda this season was eighth fastest with Josh Osby (Yamaha) and Jace Owen (Muc-Off FXR ClubMX Yamaha) rounding out the top 10. 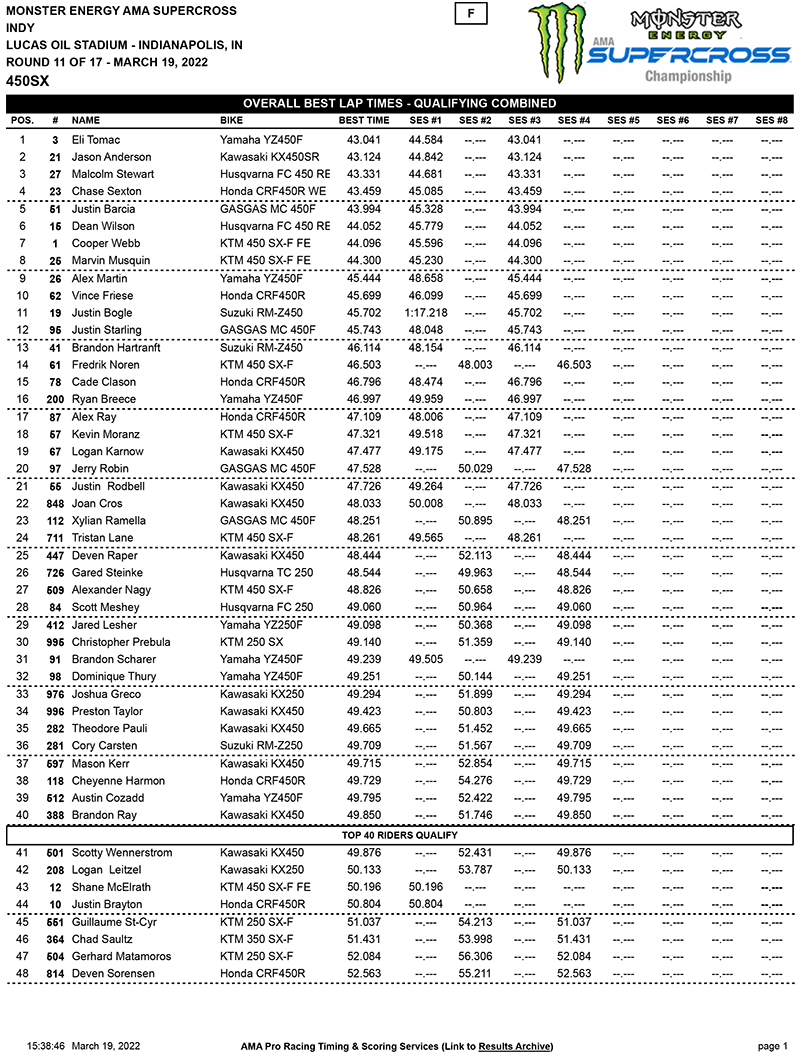