Unpacking all that unfolded in the 10th round of 450SX.

The Detroit 450SX main event will go down as a critical point in the 2022 Monster Energy Supercross Championship, packed with drama and a who’s who of the premier class crashing out of contention. MotoOnline dives into what unfolded in what was a hectic 10th round for the premier class in this Three Things feature. 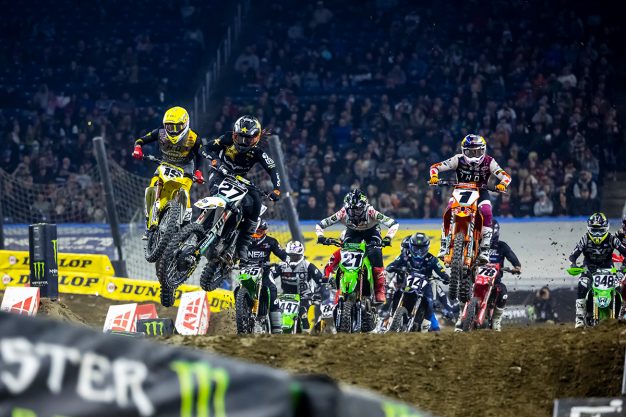 What kick-started the chaotic end to Detroit’s main was a major clash between Cooper Webb and Chase Sexton on lap 17. The defending champion himself took responsibility for the incident that ultimately ended both riders’ races. Webb made another strong start in Ford Field’s main, running in third position before he started to fall down the order and into the clutches of Chase Sexton. The Red Bull KTM Factory Racing rider made a misjudgement entering a rhythm section which caused him to land on the face of the following jump. Sexton, clearly not able to anticipate the sudden loss of momentum from Webb was left with nowhere to go, and landed on Webb bringing both riders down heavily. The Team Honda HRC rider was unable to remount, while Webb attempted to finish riding one-handed before pulling into the pits to retire. A crushing blow to both riders’ Monster Energy Supercross campaigns. Anderson was next, who realised the importance of needing to beat red plate holder Eli Tomac after his two previous outings were plagued with collisions, swiftly making his way to the front in the main. Just past half distance, Anderson was passed for the lead by Tomac, however remained in hot pursuit until the closing stages when he tucked the front. Remounted to ride straight to the tuff blocks, he retired immediately. That wasn’t all! After a poor start saw Dylan Ferrandis outside the top 10, the Frenchman kept his nose clean for a majority of the race to move into fifth. Looking set for his second consecutive top-five finish, Ferrandis’ race suddenly came to an end when he pulled off the track and retired. The cause – a right wrist injury sustained from casing a quad. The outcome marks another disappointing chapter in the number 14’s 2022 indoor campaign, the 2021 Lucas Oil Pro Motocross 450MX champion still chasing an elusive 450SX victory. Amidst the chaos, Marvin Musquin was looking a likely candidate to complete the rostrum. On lap 19 Musquin was setting up a pass on Justin Barcia – who was nursing stitches in his hand –  for third when he washed out the front-end which resulted in his head being driven into the ground. Despite a broken visor, the Frenchman was able to remount and finish fourth, but is left to reminisce on the missed chance to secure second podium of the season. 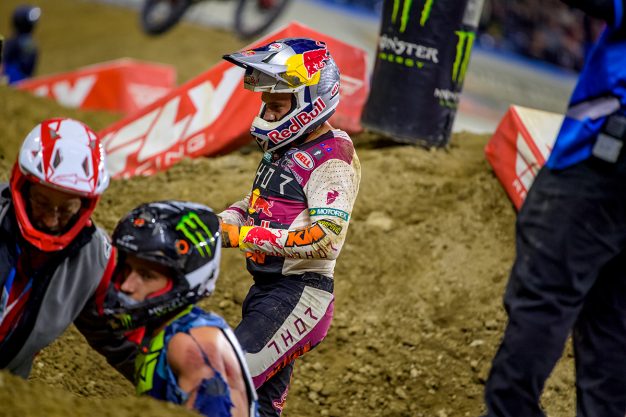 When you consider the number of race-ending falls at Detroit, it’s surprising that there’s not one confirmed absence from Indy as a result of the chaos that ensued. Anderson has made his intentions clear by stating ‘I’m planning on giving it my all at Indianapolis’ and Sexton expressed that he is healthy apart from a few scratches and bruises. Ferrandis intended to work to recover to come back this Saturday, but he’s since been scratched from round 11. The big question was Cooper Webb, since the 450 SX-F rider didn’t appear to have anything broken upon initial observation, however, even though he fractured his second metacarpal, he will race-on this Saturday.

To his credit, Tomac sliced his way past the likes of Webb and Anderson to take the lead before the carnage unfolded. Tomac now arguably has one hand on the 2022 450SX crown, a minimal points haul by Anderson while the Monster Energy Star Racing Yamaha rider scored a maximum of 26 means Tomac has a 42 point lead with just seven rounds remaining. Webb and Sexton –  both with an outside shot at the title entering Detroit – effectively wrote themselves out of championship contention after each didn’t finish the race. Amidst the attrition, Barcia was able to nurse an injured hand in a solid bout of damage limitation to complete the rostrum in third. While it was devastating to see so many key contenders unable to finish, one couldn’t help but feel elated for the likes of Justin Brayton – in his final full 450SX campaign – who avoided trouble to secure his first top-five of the season. Vince Friese also kept his nose clean to secure a season-best sixth in 450SX, as did Shane McElrath, early leader Justin Bogle, Brandon Hartranft and Cade Clason, who completed the top 10 finishing seventh to tenth respectively.