Assorted racer comments following the 10th round of the season.

In Quotebook, a selection of riders detail how their races played out in the 10th round of the 2022 Monster Energy Supercross Championship at Detriot. Marvin Musquin (Red Bull KTM) – Fourth:
It was a crazy night of racing. In the main, I got a good start and ended up second with Bogle in front of me. I should have passed him but I wasn’t good in the whoops and I lost a couple spots. On the split-lane, I was taking the inside and the outside was better so people just got by me and I dropped. After that, I started getting into a better rhythm and obviously a lot of guys went down. I was trying to pass Barcia towards the end and I lost the front-end and that could have been a podium for me, but I’m just glad I finished healthy and going home.

Jason Anderson (Monster Energy Kawasaki) – DNF:
I was feeling really good today from the start of the first practice. Probably the best I’ve felt racing in Detroit, and I think my performance throughout the night showed I had what it took to win tonight. Unfortunately, I pushed a little too hard while challenging for the lead and had a crash that ended my race early. It’s unlucky, but these things happen. I’m just glad I feel fine right now and am planning on giving it my all in Indianapolis next weekend.

Justin Barcia (TLD Red Bull GasGas) – Third:
I had to dig beyond deep. I didn’t even think I was going to be racing tonight, to be honest. My hand is pretty destroyed, I had a practice crash and it’s scary looking, so I’m just happy to be here. My team did a great job tonight. Today was a test day for us because I wasn’t riding very good, so we did tons of changes and I had a great bike for the main event – it was the best start I’ve had all year. I had a lot of fun out there, it was carnage but I just rode a smart race and ended up on the podium, it was sick!

Dean Wilson (Rockstar Energy Husqvarna) – 14th:
The main event didn’t turn out very well for me. I was in a good position, top-five actually, but I crashed in the whoops. I got up from that and had another fall, so unfortunately, not a good night. The track caught a lot of riders tonight and unfortunately, I was one of them. But I am healthy, so we’ll be back next weekend.

Malcolm Stewart (Rockstar Energy Husqvarna) – Second:
I felt good all day. P1 in practice and in the heat race, I knew we had a good ball rolling. In the main event, I didn’t get the best start but I just really had to ride because it’s one of those tracks where it’s going to bite you at any time. I just started clicking off laps and I didn’t really want to put too much thought into it, I just wanted to get up there. Once I started seeing riders crash – like top-tier riders going down – it was kind of crazy but we ended up second and I’m thankful. Let’s just keep the momentum going!

Dylan Ferrandis (Monster Energy Star Racing Yamaha) – DNF:
I felt good coming into the weekend, and the day was going well. I had a moment during my heat race but was able to come back to sixth. In the main event, I didn’t get a great start but kept pushing and was fifth, then, unfortunately, went short on the quad and was unable to finish. It’s very frustrating to have another bad night, but we will go back to Florida and work to recover and come back next week.

Eli Tomac (Monster Energy Star Racing Yamaha) –  First:
It was a wild night of racing overall and a great result for us. I had a good start down the first straight away but then got bumped in turn one and was shuffled back. From there I had to go to work. I had a good line on the right side of the whoops, which is where I was making the majority of my passes. I just felt good, and the motorcycle was great for how technical the track was. Once I got to the lead, I just kept pushing. After the halfway point, I couldn’t believe what I was seeing – some of the best guys were down on the track, and it was a bummer to see. At that point, I just kept doing my thing and kept my focus, and that was it. It was a good night for the championship and another race win; we’ll keep pushing.

Chase Sexton (Team Honda HRC) – DNF:
Overall, the Detroit Supercross was a pretty rough race for me. I had a crash in the heat race trying to go around a lapped rider, and in the main event, Cooper and I got together, which ended my night. It was unfortunate, but thankfully I’m healthy apart from a few scrapes and bruises. I’m looking forward to Indianapolis, which I consider one of my home races, and I’m excited to get back out there and make up for it.

Brandon Hartranft (Twisted Tea Suzuki) – Ninth:
It was a great day. I got into fifth place in heat one, then made a mistake and over-jumped a rhythm section. I compressed into the face of the next jump and endoed into a Tuff Blox. It wasn’t cool to be in the LCQ, but I won the LCQ, so that was a plus. I’ve never won the LCQ. Honestly, it was kind of fun to ride in first; it’s been a while. The main event started okay, then I just started breathing super heavy and my stomach started cramping. The track was definitely tough, but we ended up ninth overall. I’m proud of myself and for the whole team also not giving up. Hopefully, we can have more strong finishes, be top 10 in points at the end of the season and be in opening ceremonies next year.

Justin Bogle (Twisted Tea Suzuki) – Eighth:
A fifth-place heat race finish got us into a decent gate pick for the main event which ended up with me getting the holeshot and leading for a few laps. It was great to remember what it’s like to be up there. The pace is intense, so you have to get there and feel it again to get used to it and get back up there more. It was nice to lead some laps and finally feel a little bit more like myself. The second half of the main wasn’t great, so we’ll keep working, keep plugging away, keep doing laps, keep testing, keep improving, and keep on keeping on from there. But overall it was a much better night tonight.

Shane McElrath (Team RMATV/MC KTM) – Seventh:
Tonight was a good night. The track fit my style and had a good pace out there in the main. We have been putting in the work and it showed tonight. We’ll continue to push and bring this momentum into Indianapolis next week. 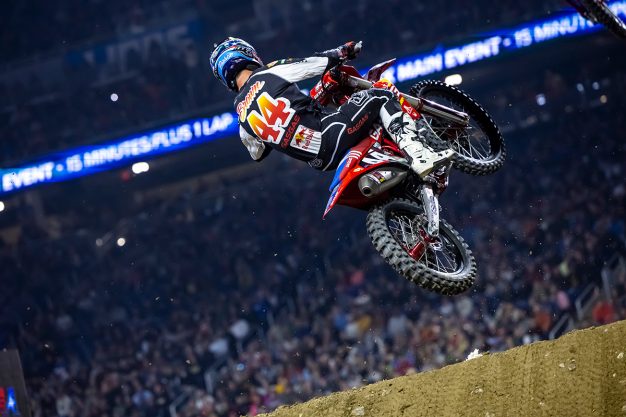 Cameron McAdoo (Monster Energy Pro Circuit Kawasaki) – Second:
This is my first time racing here in Detroit and I’m happy with how the day went. We started on a strong note after finishing the first timed qualifying session with the fastest lap time and backed that up with a strong showing in my heat race. I really want to be battling for wins and know I have the speed to do so, I just need to work on getting better starts so I can be in the mix from early on. Overall, I’m proud of how I rode and am thankful I have such a strong team supporting me.

Pierce Brown (TLD Red Bull GasGas) – Third:
Man, I had so much fun tonight, I really needed that! I’ve shown bits and pieces of speed and I finally showed I could put a full night together. I love these Detroit fans! It’s my first time here and I love it, it’s so much fun. Stoked to put the GasGas on the podium for the first time!

Stilez Robertson (Rockstar Energy Husqvarna) – Eighth:
Not much to say really, it wasn’t a great day for me. My starts were good but the riding was off all day. We’re going to put our head down this week and get to where we belong.

RJ Hampshire (Rockstar Energy Husqvarna) – Fourth:
Man, it was a tough day. Lost in the shambles for about 90 percent of it, but we managed to get out of here healthy. We did what we could in the main event and will try to be better for next weekend.

Jett Lawrence (Team Honda HRC) – First:
That one was really tricky. The track’s pretty tight and basic, but it got chewed up pretty gnarly, especially in those rhythms; it would catch you off guard now and then. It was a lot more difficult than our last couple weekends. I felt like the times were really, really close, so the boys definitely kept me on my toes. Pierce [Brown] surprised me; normally every guy revs it in the air, but he was silent – scared the living daylights out of me on the inside [laughs]. The biggest thing was just making sure I clicked my lap times off and focused on myself, because you never know when I make a silly mistake and one of these boys capitalizes on that. I had fun in that one. I’m very grateful, and hopefully I can keep marching on.

Kyle Chisholm (Monster Energy Star Racing Yamaha) – 12th:
My first race on the 250 with only a couple days on it was a learning experience. The team worked all day to get me more and more comfortable on the bike with such a limited amount of time. Qualifying went well, and I was happy with fourth in the heat race. I ripped an amazing start in the main and almost had the holeshot but came out in second place. Unfortunately, a couple of laps in, I made an uncharacteristic mistake and lost a lot of time. So that was a bummer and didn’t lead to the result I know I’m capable of, but we’ll work hard this week and come back again in Indianapolis. The track was very slippery and rocky all night which made it a tough surface to race on, but my bike was amazing. We are just working on getting the bike dialled in for my specific liking, so I think we’ll be in a good spot with more time. Thanks to the whole team for their hard work all weekend.

Derek Drake (BarX Chaparral Suzuki) – 11th:
Yesterday was an improvement. I felt more comfortable all day. I got a good start in the main, but then was on the outside of the second corner and got shuffled back. From there I worked my way back up to P11 on a tricky track.