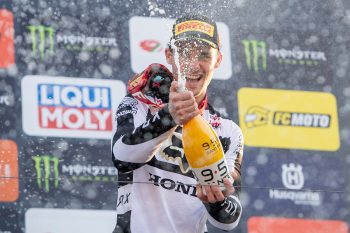 A winning MXGP of Lombardia for Tim Gajser saw the Team HRC rider extend his championship lead with a second-consecutive overall victory, as a perfect scorecard for Jago Geerts allowed him to leave Mantova with the MX2 red plate.

Gasjer trailed Red Bull GasGas Factory Racing’s Jorge Prado for much of the opening bout, finishing just 1.326s behind the Spaniard after 18 laps of racing.

Prado however suffered a challenging second outing, a poor start followed by mistakes of his own meant seventh was the best he could salvage, as Gasjer controlled the race from the front to take the victory.

MXGP rookie Maxime Renaux (Monster Energy Yamaha MXGP) continued to impress with second overall, 3-2 results adding 42 points to his 2022 tally as Prado’s race two misfortune’s dropped him to third overall for the round.

Standing Constructing Husqvarna Factory Racing’s Brian Bogers was fourth overall with 7-3 results, ahead of Jeremy Seewer whose end result was hampered by crashes in each outing, ultimately notching 4-5 results.

Looking at the MXGP championship standings after two rounds, Gajser leads on 922 with a 12-point advantage over Prado, with Renaux a further five points in arrears. Both last year’s top two, Jeffrey Herlings and Romain Febvre, have been absent from the first two rounds due to injuries sustained in the pre-season. 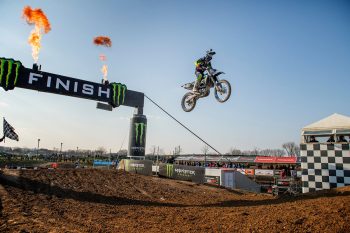 A clean-sweep for Geerts catapulted the Monster Energy Yamaha MX2 rider to the top of the standings, two fast but controlled performances elevating the number 93 to the top.

Red Bull KTM Factory Racing’s Tom Vialle was second in the opening bout, before a massive crash on the face of a tabletop saw him launched from his machine before landing heavily, resulting in a zero points score for race two. Vialle was able to remount after the incident, seemingly avoiding any major injury.

Geerts holds a four-point championship advantage over round one winner Simon Laegenfelder, with de Wolf 16 points from the red plate in third.

The MXGP of Lombardia marked the opening round of the 2022 WMX championship, which saw Nancy Van De Ven (Yamaha) emerge victorious after notching 2-1 results.

Race one winner Lynn Valk (Yamaha) ultimately lost out on countback with a 1-2 scorecard, finishing ahead of Martine Hughes (Honda) who completed the overall podium with -5-3 finishes.

Up next on the 2022 MXGP World Championship calendar is the MXGP of Patagonia-Argentina at Villa La Angostura on 20 March, round three of the 20-round series. 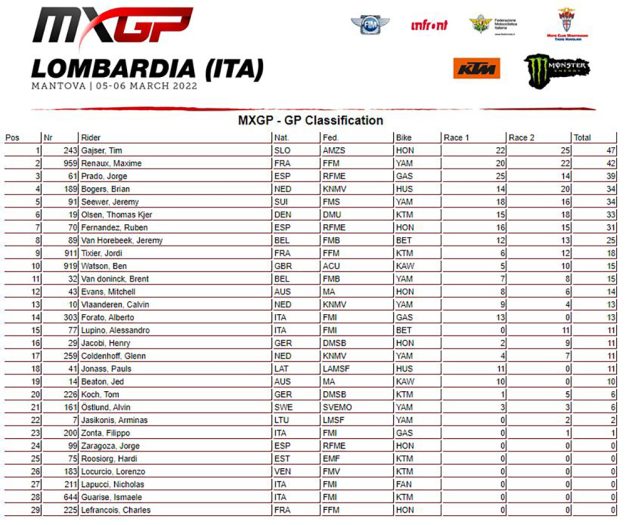 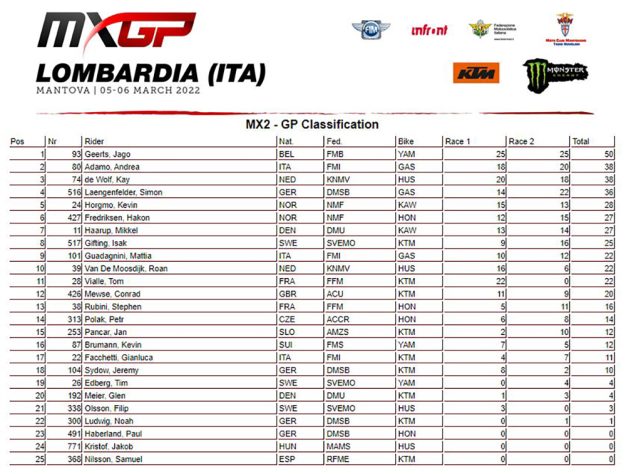 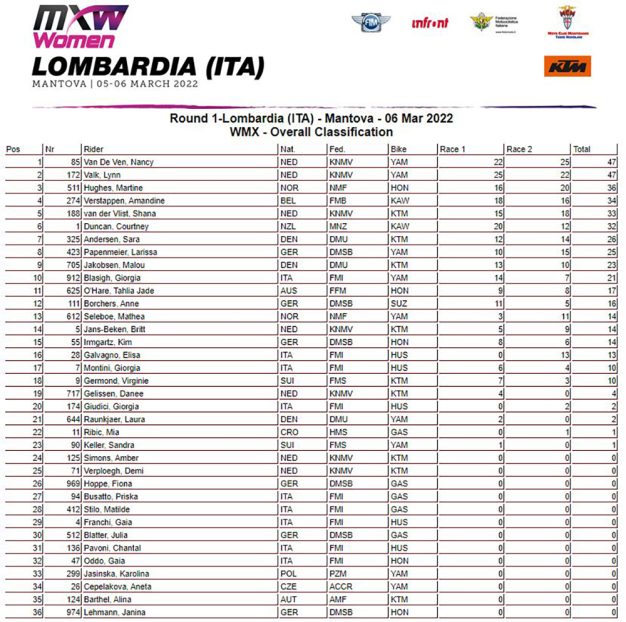