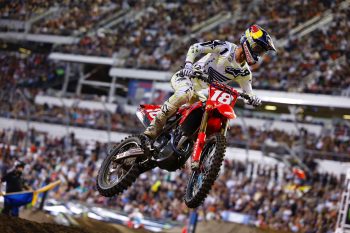 Team Honda HRC’s Jett Lawrence has again leapt clear of his rivals in the Monster Energy AMA Supercross 250SX East Championship after a commanding display at the ninth round at Daytona.

In his first appearance at the Daytona International Speedway, Lawrence established himself as the man to beat all day, but it was his Main event performance that stood out as he cruised to a 14-second victory.

Rockstar Energy Husqvarna’s Stilez Robertson enjoyed a blinding start to claim the holeshot in the 250SX East main event, but two corners later Lawrence took the lead and was never headed from there.

Rockstar Energy Husqvarna’s RJ Hampshire rounded out the top five with the first lap in the books, but came up short on a triple and tumbled down the leaderboard to eighth.

Meanwhile, joint red-plate holder, Cameron McAdoo  (Monster Energy Pro Circuit Kawasaki) had an average start and finished the first lap in seventh, and then struggled to get past Pierce Brown (TLD Red Bull GasGas) for fifth.

Slightly ahead of them, team-mates Lopes and Nicoletti traded places several times for the podium spot, before Lopes eventually took the spot.

While that was going on, McAdoo found himself in the sights of Hampshire, who was clawing his way back from his earlier crash.

The Brown-McAdoo-Hampshire train caught and passed Nicoletti and Lopes with less than five minutes left on the clock, before Hampshire and McAdoo commenced a furious battle where they traded positions several times.

McAdoo dispatched of Hampshire then upped the intensity, finally finding his way past Brown for third with three laps remaining.

Up front, Lawrence cruised to an extremely comfortable 14-second wire-to-wire victory, over Robertson, with McAdoo another five seconds adrift in third. Brown and Lopes rounded out the top five.

Lawrence now holds a five-point lead over McAdoo, with Robertson moving up to third overall in the 250SX East championship standings.