In this month’s instalment of Matthes Answers, led by PulpMX’s Steve Matthes, get his take on the 450SX title at halfway, what’s going on with Ken Roczen, the form of Phil Nicoletti and FIM World Supercross as it stands. If you want to send him a question, simply get in touch via the @motoonline socials and we’ll pass on the most timely questions each month. 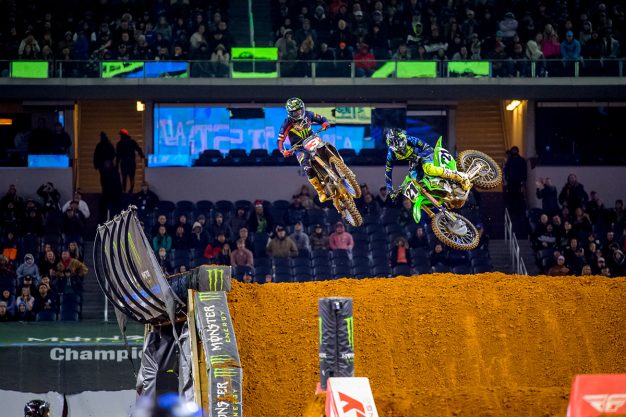 Is 450SX purely a two-rider race for the title between Tomac/Anderson at this point?

I think it is. Those two riders have proven to be better than the rest of the field at most races this year and, if you’re reading this past Daytona, it’s over halfway in the series now. As I type this, Cooper Webb’s over a race down and has three riders to jump, Malcolm Stewart has never even won a 450SX and you’re telling me he’s going to run off a string of them to get to the top? I think we’ll see Webb get a win and I think Chase Sexton could get a couple from here on out, but what you’re seeing this year is what you see just about every year of the series – the field thins out as the weeks go on and one or two – maybe three – riders emerge as title contenders. This year it happens to be the two guys that are on the older side of things and switched to new teams which is… errr, weird, but here we are.

Where do you see Ken Roczen’s career going from here? That win at A1 is a distant memory by now…

Dude, WTF? What’s going on here? I don’t understand anything that’s happening in life right now. Roczen’s average finish since that opening race win has been an 11th. Read that back and let it sink in. I checked with Kenny this week and wanted to see how he was doing. Obviously he wasn’t going to spill his guts to me, but he didn’t seem too bothered by what was going on. It’s the same bike as last year, so I don’t get it from that angle either. As I’ve said on my PulpMX Shows, maybe it’s just time for Honda and Kenny to part ways here. Sometimes, as we’ve seen with the top two riders in the points this year, change can be a good thing and an impetus for change. Someone asked me if I thought he could get a podium this year and I said I don’t know. That’s where we’re at right now.

Phil! How did Nicoletti all of a sudden become ‘a guy’ in Supercross? He’s been solid.

I don’t know! He’s been away from SX for four years and somehow he’s better? I know he would argue with the ‘better’ part, for sure, but this has been pretty good through two rounds. I would say a huge part of Phil’s ‘success’ to start has been that his motorcycle looks really good. The last time he raced 250SX, where the bike is a HUGE part of the equation, he was on a Suzuki 250F, which while good, isn’t great. Now he’s on a Yamaha that’s fast, with a company doing the motor that knows what they’re doing, and with KYB suspension help. I think his bike looks really good out there and that’s allowing him to be his best. Also, I was speaking to his friend Marshall Weltin, who trains with Phil during the week, and he was saying that Phil’s really been putting in the work on and off the track even admitting that Phil does more than him! So there you have it, he’s in shape, he’s got a good bike and he’s working hard. Whats your personal reaction to the latest info on World Supercross?

I think that competition, whether it’s race promoters or motocross podcasts, is a good thing. It’ll raise the bar across the sport and as I’ve long said, this is a good thing. Riders getting paid to race, teams getting paid to show up is awesome and I’ll be looking forward to covering the series. From what I hear from teams is that the promoters are talking more along the lines of getting the very elite riders from the USA and them racing the WSX after the US SX series, instead of the US MX series. That, I don’t think, is going to happen. The USA teams get funding to race in the USA, the MXGP teams get funding to race in Europe and so on. I don’t see, say, Jett Lawrence getting paid from Honda to race USA SX and then who’s going to pay him to race WSX? And if you say Honda, who’s going to pay for the rider that will replace him at American Honda at the US motocross races? And who’s paying for all the parts that Jett would need to go race WSX? I don’t think any American-based OEM is going to throw the towel on the American motocross series because that’s not what they’re paid to go do. So I don’t think the elite of the elite will go, if they have an American OEM contract they’ll do both the SX and MX series here, but guys like Justin Brayton (not racing US MX), Marvin Musquin (older guy on last year of SX-only deal) and other riders like that could definitely find a team and sign up. But again, who’s going to pay for the suspension and other parts these elite riders will want on their bikes? I have so many questions, but in the end, it’s a good thing and I look forward to seeing how it all unfolds.

Still on the FIM series, has there been any whispers of US teams or riders taking a serious look at it?

Oh for sure, I think you can count on a MotoConcepts signing up for that series or any team that doesn’t do the nationals now. Heck, a team like SGB Honda would – I think – ditch the nationals that are expensive to contest for a series like WSX that actually will pay THEM to show up. But no, I don’t expect any American OEM team that gets money to race in the USA in front of USA people to ditch the nationals and go the WSX route.