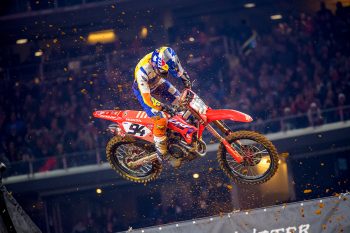 Team Honda HRC’s Ken Roczen suffered a series of uncharacteristic crashes at Arlington, limiting his result to 13th overall at the second Triple Crown of the season.

Roczen had a difficult start in the opening main, falling in the whoops section while in eighth before remounting and finishing 16th, the German then finishing ninth in race two.

The final race of the evening saw Roczen fall again, involved in a first turn crash before crossing the line in the final outing in 16th to complete a challenging 16-9-16 scorecard.

“The race here in Dallas was a better start to the day,” Roczen explained. “I felt a lot better about myself and was able to put in some good qualifying laps. I haven’t been that far up on the board in a long time, so overall this was probably the first race where I was actually having fun.

“Come the night show though, that all turned around because of how slick the track was – they watered pretty heavily. I was really struggling with the bike and with traction, resulting in a lot of crashes which is very unlike me. It was another very frustrating weekend. I’m looking forward to Daytona, as it usually changes things up and makes for a fun track.”

It’s been a difficult season for the number 94, a victory at Anaheim 1 overshadowed by the fact he has only been able to secure one top-five finish at Glendale in the following seven rounds, now ninth in the 450SX standings 60 points behind red plate-holder Eli Tomac.

Daytona – a venue where Roczen finished fourth last year – provides another opportunity for an uplift in form, taking place this Saturday and marking the halfway point of 2022 Monster Energy Supercross.