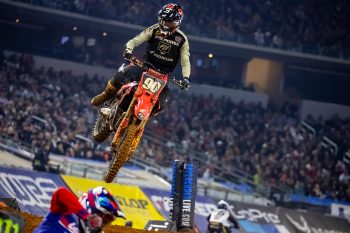 Smith admittedly didn’t feel good at AT&T stadium, crashing in qualifying before riding to 6-10-7 results, just three points away from the overall podium.

“I didn’t feel great all day,” Smith stated. “I had a small crash in qualifying and hurt my elbow. In race one I did ok but rode sensible, in race two I gated well and felt stronger, we made a small change to the rear, and it was working.

“Unfortunately, I ended having two falls, one I couldn’t avoid as a rider crashed in front of me over a jump. I was happy to get up and get back to 10th.

“I have some things I need to work on, we improved the bike over the weekend, but I can’t afford these falls. Fifth was great and we are within striking range of the top three. I want to be a podium guy and we will work hard to get there.”

The CRF250R rider now sits seventh in the points standings after the opening two rounds. While Jordon’s consistency in the first and third races helped propel him into the top five during the Triple Crown, falls in race two ultimately cost him a chance at the overall podium.

Seven races still remain for Jordon to continue his podium charge in 2022 250SX East, the next of which taking place this Saturday at Daytona.