Daytona the target for Kitchen to continue racing

Extent of injuries not confirmed by Star Racing Yamaha team. 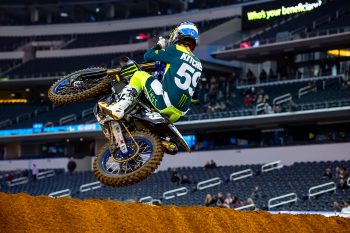 Highly-rated 250SX East rookie Levi Kitchen is targeting to continue racing at the Daytona Supercross this weekend, despite crashing out of the Triple Crown in Arlington.

Kitchen entered AT&T Stadium looking to build upon a promising first outing at Minneapolis, where he finished in P9, until falling in race one on Saturday night.

The 21-year-old made a solid start to the first race in Texas, challenging just outside of the top five when he went down and, following initial evaluation from the Alpinestars medical team decided to sit out the remainder of the event.

“It was a tough first Triple Crown for me, but that’s racing,” Monster Energy Star Racing Yamaha’s Kitchen reflected. “I’m going to rest up this week and hopefully line back up next weekend in Daytona.”

The full extent of Kitchens injured has not yet been confirmed, the YZ250F rider facing a short turnaround in order to recover before the gates drop again this Saturday.

“Levi was fighting for a top five finish when he came together with another rider and crashed,” Star Racing 250 team manager Jensen Hendler added. “After being evaluated by the Alpinestar medical crew, we decided to sit out the rest of the night. Levi will have a week of recovery and hopefully be healthy to race Daytona.”