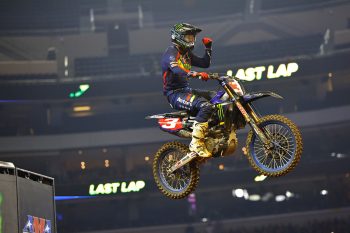 The second Triple Crown race of the 2022 Monster Energy Supercross season saw Eli Tomac put his Monster Energy Star Racing Yamaha atop the box in an action-packed night of racing in Arlington.

Main event number one was packed with drama from start to finish inside AT&T Stadium, with Red Bull KTM’s Marvin Musquin putting himself up front and leading the first two laps.

It wasn’t long before Malcolm Stewart (Rockstar Energy Husqvarna) found his way to the front chased by Anderson with the duo breaking away from the pack. Anderson eventually attempted a pass that saw both of them hit the ground late in the race, allowing Justin Barcia (TLD Red Bull GasGas) to assume the lead, with Cooper Webb (Red Bull KTM) just behind and two minutes left on the clock.

Webb managed to dig deep despite a charge from Barcia, eventually making the pass on the last lap to seal the win. Tomac recovered from deep outside of the top 10 to finish third place, with Chase Sexton (Team Honda HRC) and Stewart rounding out the top five.

In the second main, Sexton grabbed the holeshot with Anderson and Tomac just behind. After the opening six laps, it looked as though Sexton was going to be able to maintain a lead putting a bit of time between himself Anderson and Tomac who began to battle.

Anderson fought off a charge from Tomac and made a break for Sexton out front, eventually passing and taking the win, with Tomac second and Sexton in third. Winner of the first race, Webb came across the line in fourth, setting up a battle for the overall in the final main.

In the final main of the evening Tomac didn’t wait long to grab the lead, with Anderson filing in behind him quickly. The duo gapped the field, with Anderson eventually taking the win, but it was Tomac’s consistency that saw him take the overall win.

Tomac’s win marked his 10th Triple Crown overall, and puts him atop the points standings by six over second-place finisher Anderson.

Third place went to Webb with 1-4-4 finishes on the night, giving him his second podium in succession, following bike changes on the all-new KTM 450.

Sexton managed 4-3-5 scores on the night to take fourth overall, putting him just ahead of Stewart, who found his way onto the podium in the final main to salvage an up and down evening.

Barcia, had a rough go after taking second in the opening main, eventually taking home sixth and seventh place finishes and ending the night in sixth.

Dylan Ferrandis’ 9-5-8 scorecard put him seventh overall, as the Frenchman continues to hammer away in search of his first win in the premier class. Eighth was Brayton who had a consistent night with two finishes inside the top 10.

Ninth went to McElrath who ran up front in the final moto of the night aboard his Rocky Mountain ATV/MC KTM, with Dean Wilson rounding out the top 10 on his Rockstar Energy Husqvarna.

The series now heads to the famed Daytona International Speedway, where Tomac will be the odds on favorite as he looks to continue his winning ways at the venue. 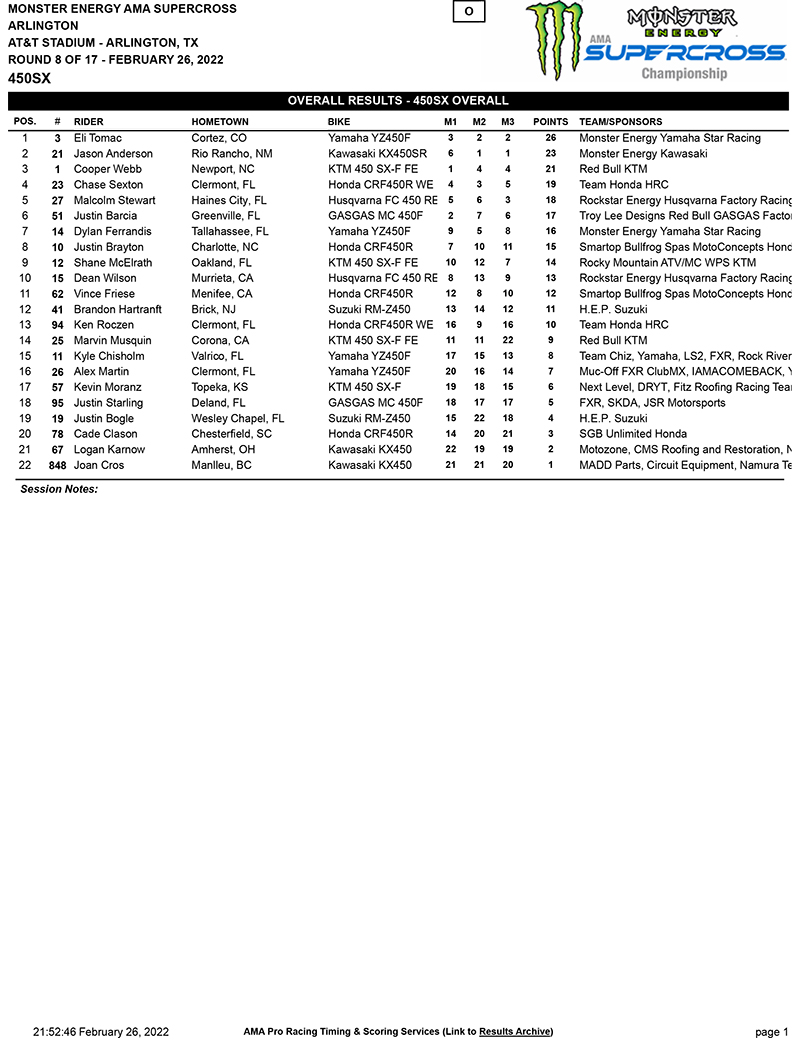