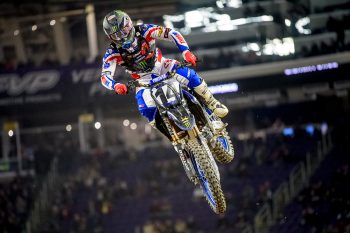 A series of penalties were applied following the Minneapolis main events in round seven of Monster Energy Supercross, including Monster Energy Star Racing Yamaha’s Dylan Ferrandis in 450SX.

After finishing ninth in the premier class final, Ferrandis was docked four championship points and a purse deduction equal to two positions was applied due to jumping on a red cross flag.

“The day started out well with another good qualifying, but unfortunately, I was in a lot of pain in the main event after my two big crashes at the previous races,” Ferrandis reflected. “I did what I could and finished ninth. We’ll keep working and try for better next week.”

That same penalty was given to Yamaha-mounted 450SX class privateer Ryan Breece, along with Jace Owen (Muc-Off FXR ClubMX Yamaha) in the opening 250SX East main event of the season – also each for jumping on the red cross flag.

A three-person group from the AMA has been implemented for the 2022 season, including Jeremy Albrecht, Mike Pelletier and Tim McAdams.