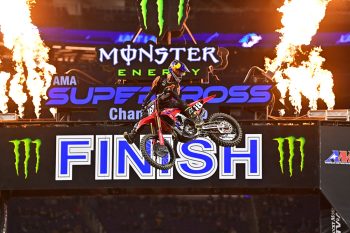 After qualifying fourth and finishing second in his heat, Lawrence peaked in time for the opening round main event to pick up win number one of the year and claim the red plate in the process.

It was Austin Forkner (Monster Energy Pro Circuit Kawasaki) – fastest this afternoon – who jumped out of the gates and the the field initially, before Lawrence made light work of him in an immediate pass and gradually powered away to a 5.349s advantage as the checkered flag flew.

Still, runner-up was solid for Forkner after enduring a rough outdoor campaign last year, trailed by teammate Cameron McAdoo throughout the main event in a Pro Circuit podium double.

McAdoo was able to hold his composure despite having Jeremy Martin (Monster Energy Star Racing Yamaha) chasing him down, who in turn himself was coming under pressure from RJ Hampshire (Rockstar Energy Husqvarna) late on, but that is how the top five would remain.

There were a number of high-profile non-finishers, including Max Vohland (Red Bull KTM) after going down early, Jarrett Frye (Fire Power Honda Racing), Joshua Varize (Husqvarna) and Arenacross champion Kyle Peters (Phoenix Racing Honda), who was circulating inside the top 10 before Brown made contact on his way through mid-race. 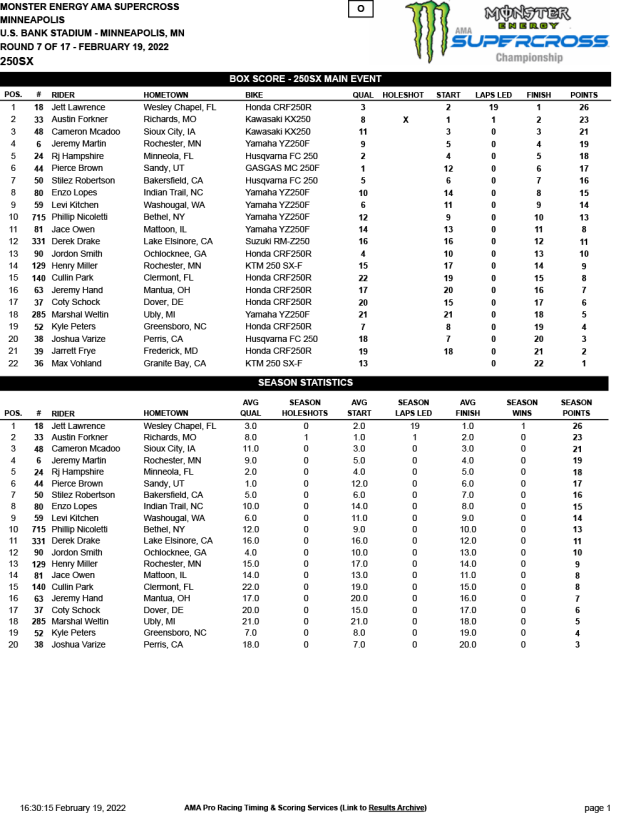