Keeping ‘in the moment’ part of McAdoo game-plan 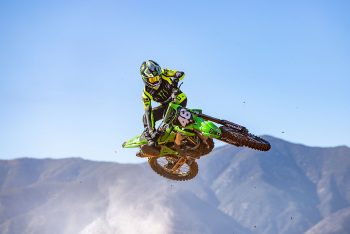 After a breakout 2021 in 250SX, Cameron McAdoo has his sights set on a stronger season and looks to keep ‘in the moment’ in a more methodical approach towards 2022.

McAdoo shot out of the gate in the opening stages of last year’s Supercross to secure 2-1-3 results in the opening three rounds and grab the red plate early.

As the season unfolded the Monster Energy Pro Circuit Kawasaki rider managed another three rostrum finishes, however inconsistent results at pivotal moments meant he ultimately finished the championship in third.

“For me, anytime I put an expectation on myself I feel like it doesn’t always go right,” McAdoo stated. “I feel like that’s maybe where I went a little bit wrong last year.

“I feel like we all work so hard, so the goal and the plan is to fight for wins, fight for podiums and be in it at the end. Now I know I can get to it, I was in it last year pretty well, that’s definitely the goal and that’s what we work for.

“There’s a big process before doing that end goal, I just want to stay grounded and kind of stay in the moment, through each round, each year. There are three practices, a heat race and a main event nine times, so got to put it all together to kind of make it happen, the goal is just to stay present and bring my best version of me each time I’m out on the track this year.”

The 2022 Monster Energy Supercross 250SX East Championship commences this Saturday at Minneapolis, marking the first event of the nine-round series.