Selection of contenders outline thoughts for 2022 season ahead.

The highly-anticipated Monster Energy Supercross 250SX East Championship commences this Saturday in Minneapolis, where youth meets experience in terms of expected contenders. A group of key championship hopefuls recently spoke about the pressures and expectations ahead of the upcoming series. 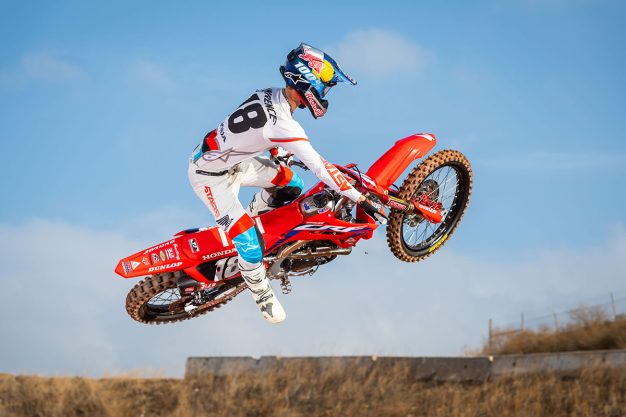 Jett Lawrence (Team Honda HRC):
It’s kind of good to have a bit of that pressure there to be honest because it makes it a dangling of the carrot sort of thing. At least I’ve been in a champions situation now for most the part before I axed myself again, and outdoors I had a great battle with Coop [Justin Cooper] so I know what it’s like now. Hopefully, I can use that to my benefit with supercross and eliminate those stupid mistakes and try not to axe myself again. I think it’s going to be good, I like to have some pressure because it makes it more exciting, puts you on that edge and see how fast your thinking is, see if you are making the right decisions. It’s going to be fun, I know Jeremy [Martin] is going to be really good this year, so I’m excited to battle with him, hopefully we can get into another battle like we last left off at Ironman, that was awesome, I can’t wait to get the season going and see how it goes really. You can’t really tell how you are going to do before the race, so you can’t really put too much pressure on yourself until you get to the first race.

Jeremy Martin (Monster Energy Star Racing Yamaha):
I guess my perspective is a little bit different now, let’s be honest, I think my best overall finish in the [Supercross] series is third. I think ‘man you’ve got to climb the mountain, right?’ That’s nine rounds, so the biggest thing, I’m not going to get ahead of myself. There’re a lot of fast guys in the class and they’re all going to be there on Saturday, so the biggest thing for me is to not be my worst enemy and just go out and have fun and do what I love.

Cameron McAdoo (Monster Energy Pro Circuit Kawasaki):
For me, anytime I put an expectation on myself I feel like it doesn’t always go right. I feel like that’s maybe where I went a little bit wrong last year. I feel like we all work so hard, so the goal and the plan is to fight for wins, fight for podiums and be in it at the end. Now I know I can get to it, I was in it last year pretty well, that’s definitely the goal and that’s what we work for. There’s a big process before doing that end goal, I just want to stay grounded and kind of stay in the moment, through each round, each year. There are three practices, a heat race and a main event nine times, so got to put it all together to kind of make it happen, the goal is just to stay present and bring my best version of me each time I’m out on the track this year. 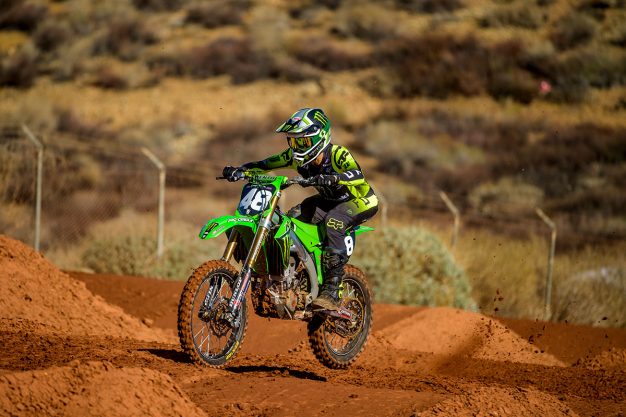 Austin Forkner (Monster Energy Pro Circuit Kawasaki):
I definitely still feel like I am a threat. Supercross last year, I got second at the first race after kind of having to come through the pack, and the second race me and RJ got together and went down and I was running third and was trying to get him for second. I feel like I am definitely still a threat, I definitely still consider myself to be a championship guy. Actually this year, it’s my last year in the 250 class so I feel like I should have a lot of pressure on me this year, but honestly coming into the year, I don’t feel a lot of pressure, maybe that’s because I’ve gotten hurt really bad, I’ve blown multiple championships. The last outdoors was just a horrible 12 rounds, I feel like I’ve gone through some stuff and I’m coming into this year not feeling a lot of pressure. I’m excited to go racing, usually, already I’m starting to get a little bit nervous coming into the first, I just feel excited to go racing.

RJ Hampshire (Rockstar Energy Husqvarna Factory Racing):
I’ve been around for so long now, I’m in a really got spot where I’m training, I have a really group of guys behind me, the team is putting a lot of belief in me in which way to go with this bike. It’s cool to see, we have two younger teammates, and same thing, kind of bouncing off of them a little bit. Then spending the whole off-season with Malc and AP was huge, every day we were pretty dang close, having battles. It’s just getting that race feel, being able to push but still kind of keep it in control. Trying to do the best we can every day, looking for something positive, try to keep it positive. It’s really easy to get down on yourself and I tend to be pretty hard on myself. So I’m just trying to keep it more chill and laid back then go and do it at the races. We’ve been really trying to focus on the starts with this new bike, we’ve been making a lot of progress with it. You never know until you go racing, it’s kind of a good thing we had a lot of rounds before we go racing because we learned a lot about the bike. All in all, I’ll just try to take my years that I’ve had and not try to throw it away at the beginning, get through the first few rounds and see where we are at.