Responsible for the supervision and growth of the global brand. 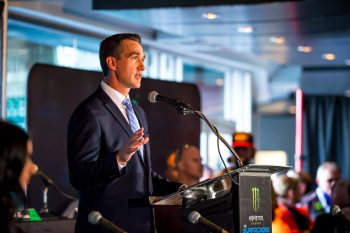 Feld Entertainment has announced the promotion of Dave Prater to vice president of Supercross, where he will be responsible for the supervision and growth of the global Monster Energy AMA Supercross Championship brand.

Prater’s expertise and understanding of the sport, along with his strong relationships in the two-wheel motorcycle industry will assist Feld Entertainment in continuing to grow the sport. He was formerly the series’ senior director of operations.

Since joining Supercross in 2000, Prater has contributed tremendously to the operation and expansion of the industry. In particular, he has demonstrated excellent leadership over the last two years as Supercross was the first sport to complete its season through the unprecedented circumstances of the pandemic.

Feld Entertainment purchased Supercross in 2008 and Prater has been instrumental in several changes over the years including a revamped points structure, the introduction of the Triple Crown race format, the expansion of the Dave Coombs Sr. East/West Showdown events, Supercross Futures, the Monster Energy Cup and the NBC Sports broadcast package.

The 2022 Monster Energy Supercross season is experiencing pre-pandemic fandom with live event ticket sales, FanFest attendance, and both domestic and international streaming. The first six rounds have produced four different winners in the premiere class and a tight points chase with the leaders.