Assorted racer comments following the sixth round of the season.

In Quotebook, a selection of riders detail how their races played out in the sixth round of the 2022 Monster Energy Supercross Championship at Anaheim 3. 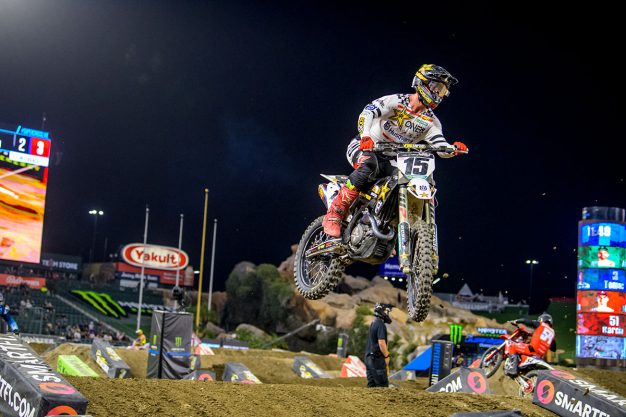 Marvin Musquin (Red Bull KTM) – Fifth:
I felt like I was right there all day – the speed was good and the feeling was good. In the main, I got a decent start and put myself in a great position in third behind Tomac. Unfortunately, I went into the inside and hit a lapper and went down and lost a lot of ground. I’m really happy with the way that I fought and rode but without the mistake it would have been a podium tonight. It hurts a little but we have to look at the positive, which was the speed and the fight I had.

Cooper Webb (Red Bull KTM) – Eighth:
It wasn’t the best night, I’m still struggling with some stuff, but we charged hard all day. I got a decent start in the main and kind of got shuffled back. It’s not where we want to be by any means but I rode to the best of my ability tonight with what I’ve got, so we’ll go to Minneapolis and see if we can turn it around.

Aaron Plessinger (Red Bull KTM) – Ninth:
I was feeling really good for tonight. I actually qualified the best I have this year and I rode well in the heat race, ended up second. In the main, I was feeling really good and confident but I just got out there and didn’t ride like myself – I made a lot of mistakes and just didn’t execute. I need to be better. I’m going to work on it this week and come out swinging in Minneapolis.

Jason Anderson (Monster Energy Kawasaki) – First:
From the fastest qualifying time to leading every lap of the heat race and the Main Event, we had a great day. In the main, I grabbed my second holeshot of the night and immediately had pressure from Eli [Tomac]. The track was demanding and our speed was fast so I knew it would be a tough race but, my KX450SR took everything I threw at it and battles like that are what supercross is all about. While it was tough for us on the track, I had a blast fighting for the win and it sounded like the fans were absolutely loving the race. All things considered, I think that was one of my best main events ever.

Justin Barcia (TLD Red Bull GasGas) – Third:
It’s definitely good to be back here on the podium. The heat race was so good tonight but I’m a little disappointed with the way I rode in the main event – Jason and Eli had a great race. I got a decent start and fought through the pack pretty good, so a lot of positives for sure. I had a lot of fun and the track was awesome!

Dean Wilson (Rockstar Energy Husqvarna) – 12th:
My night was a little bit rough. I qualified well but I crashed in my heat race and had to go to the LCQ, which is never ideal. After that, I was far outside on the gate and was just kind of in traffic the whole time and the best I could do is 12th. I really struggled in the main with flow, I felt like I was kind of fighting my bike everywhere. Not my best night, but we’ll work on trying to be better.

Malcolm Stewart (Rockstar Energy Husqvarna) – Fourth:
I felt like the entire day was good. I already knew the track was going to be really dry and slick because we already did two races and this was the final round. I felt like the biggest factor of tonight was the whoops and I just tried to be smart – this was one of those races where you could gain some and lose a lot, so I’m happy with taking another top-five finish. We’re definitely keeping the ball rolling.

Dylan Ferrandis (Monster Energy Star Racing Yamaha) – Sixth:
It was another bad night for me. I had a big crash in my heat race and had to go through the LCQ. I was pretty sore, but I fought as hard as I could and finished sixth. It’s really frustrating to have these tough weekends. We’re going to keep working and try to get back on the podium.

Eli Tomac (Monster Energy Star Racing Yamaha) – Second:
It was another good podium for us. It wasn’t a win, but I fought as hard as I could. I tried to take the lead early in the race and made a quick move on Jason for one jump, but he was able to get back right underneath me right away. I was really strong in the whoops the first half of the race, and then I made one mistake and lost a little bit of my edge. That’s where I felt like I lost the ground tonight – the whoops because it was my advantage. At the same time, once I made that mistake, I was like, ‘alright, maybe I need to back it down, too, and just stay consistent.’ It was a solid night on points, and I’m looking forward to going east.

Ken Roczen (Team Honda HRC) – 11th:
Our weekend at Anaheim 3 was honestly a disaster. I was really uncomfortable all day. It doesn’t help that they’ve been building the track gnarlier than maybe even any other year, so It’s just a bunch of stuff collapsing and it’s just not good right now. Nonetheless, I’m going to continue working on myself and try to improve every weekend. We have to find a bike setup that works for me. It’s definitely not enough right now in order to compete with those guys out there. It’s a tough pill to swallow, but we’re not giving up.

Chase Sexton (Team Honda HRC) – Seventh:
Anaheim 3 was a challenge all day. I didn’t feel that great with the whoops section or the track itself; it wasn’t a good combination for me. I felt decent halfway through the main event and then made some mistakes, got squirrely a few times and lost ground. It was a frustrating night for me; I lost a good amount of points. I’m going to have to turn it back up when we go East. I’m going back to Florida this week, so I’m happy to go home and get back to a normal schedule. Hopefully we can crank out some wins. Overall, I’m proud to get out of here healthy with how treacherous the track was, and I look forward to Minneapolis.

Brandon Hartranft (Twisted Tea Suzuki) – 15th:
In the main event I was riding pretty aggressively in the beginning. I had a little battle with another rider. I tried showing a wheel on him and trying to be a little more aggressive and hang with the boys. Then I started making mistakes. Because of that I got out of my rhythm. So, for not riding that well in the main, 15th is pretty solid.

Adam Enticknap (Twisted Tea Suzuki) – 22nd:
I rode a lot better and was more consistent. I was flowing with the track. There was a really long set of whoops this weekend that were treacherous. That’s my strong suit, so I hammered those out. It was definitely beneficial for me to have such a long set of whoops, being that I’m so big. Hunter Lawrence (Team Honda HRC) – DNF:
It was obviously a bit of a scare, with what could’ve been something pretty bad, but it checked out to be all okay as far as my body is concerned. We were really going for the win, so we were laying it out there. Second place seemed like the easy option, as we had extended a pretty good gap on third, but I was pushing for the win – I felt like that was a pretty defining race in the championship, and I wanted to go for it. The whoops were super-gnarly, and going at full speed and pushing as fast as you can every lap, it’s how the sport can be sometimes. I’m thankful to the team for supporting me.

Michael Mosiman (TLD Red Bull GasGas) – Third
It was a tough race for me. I made a couple of silly mistakes, and I’ve got to clean that stuff up but it’s fuel to the fire. After some post-race reflecting, it really lit a fuse under me and it’s going to be good going into this off-season break to have a lot of motivation. Tough nights like these but it’s hard to be too mad when you’re in front of fans like this.

Christian Craig (Monster Energy Star Yamaha Racing) – First:
It was a good day here in Anaheim. Practice went well, and I was gelling with the track, feeling comfortable. I got off to a good start in my heat race and put in my laps. Then in the main event – I really focused on my start. I knew if I could check that one off, then the rest would kind of play out by itself, and I’d be in a good spot. I was able to get into the lead in the second turn, and from there, I just focused on my laps. The track was pretty crazy, and some of the rhythm sections and the whoops were sketchy, but I was able to just do my laps and let the rest play out behind me. We get a little break now, and we’ll try and keep the momentum going for Seattle.

Nate Thrasher (Monster Energy Star Yamaha Racing) – DNF:
It was another tough night for me. I felt like I was riding well and had the speed, but unfortunately, another rider went down in front of me, and I had nowhere to go. I’m really bummed. It’s not how I wanted to finish the West Coast run, but we have a break and will get back to work and regroup.

Jalek Swoll (Rockstar Energy Husqvarna) – DNF:
It was a short night, but I felt good and I’m thankful to be leaving from the crash healthy. I felt good – like I got back up to how I was feeling before the crash at A1. I made some good passes at the beginning and felt like I was on that forward charge and the whoops bit me and bit me quick. It’s all good, I’m going into this break with my head down and we’ll get back to being on one of these top-three steps.

Carson Mumford (BarX Suzuki) – DNS:
Unfortunately, my shoulder was still in bad condition from last weekend. I tried to tough it out through the pain, but I could only do a couple laps in practice. Because of that we had to call it a night.