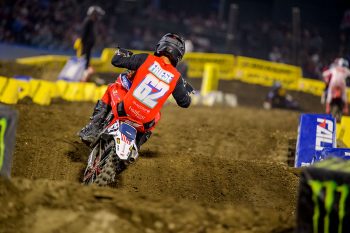 Smartop Bullfrog Spas MCR Honda’s Vince Friese is set to return to 450SX at Minneapolis, making the transition back to the premier class for the eastern region.

Friese claimed his first 250SX West podium of the year in the Anaheim 3 main event, ending a seven-year Supercross podium drought after finishing P2 in a race of attrition.

The 31-year-old lighting-fast starter now turns his attention to the 450 class for the next five races, effectively trading places with the teammate and 250SX East entry Mitchell Oldenburg in a unique model that sees the two riders spread across each 250SX West, 250SX East and 450SX category.

“I got to ride the bike once last week,” Friese commented. “I had a blast. It’s pretty cool to be able to change it up in the middle of the year and kind of get ride of the monotony of same bike, same track, the same week.

“Going to go and mix it up with the 450 guys and I’m really looking forward to it. I think I’m going to put on a clinic [on how to get a good start] in the 450 class next week [laughs] – we are going to have some fun with those guys.”

Friese’s strongest result last season in 450SX was 11th at Arlington. Off the back of his current form, he will be eager to make a further impact in Monster Energy Supercross at round seven.