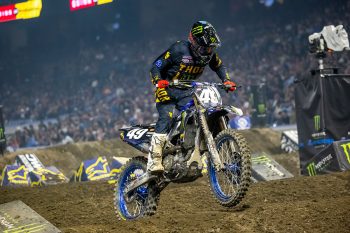 A difficult outing at Anaheim 3 left Nate Thrasher eager to regroup during the current break in 250SX West, the Monster Energy Star Racing Yamaha rider showing flashes of speed before a fall brought his night to a close.

Thrasher qualified fourth and charged through the field in his heat race to finish second, hinting a first podium of the season was looking like a real possibility at round six.

The main event provided different fortunes, however, the 19-year-old running sixth in the opening stages until Jalek Swoll fell in front of him through the whoops and, left with nowhere to go, the number 49 also ultimately went down and out of the race.

“It was another tough night for me,” Thrasher explained. “I felt like I was riding well and had the speed, but unfortunately, another rider went down in front of me and I had nowhere to go.

“I’m really bummed. It’s not how I wanted to finish the west coast run, but we have a break and will get back to work and regroup.”

Thrasher’s strongest result of the season to date came at Anaheim 2, where he secured fourth, the YZ250F rider currently sixth in the championship standings as the western region competitors enter a five-week break before returning at Seattle.