Further trouble for Swoll after being ‘bit’ by whoops 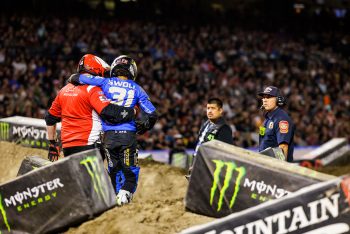 Amidst a night of attrition in 250SX West, Jalek Swoll’s charge was brought to a premature end when he was ‘bit’ by the whoops, forcing his exit from the main event at Anaheim 3.

Swoll suffered a heavy fall at Anaheim 1’s season-opener, missing round two in San Diego as a result and has been in a process of rebuilding since his return at San Diego.

Round six started positively for the Rockstar Energy Husqvarna Factory Racing rider, fifth in his heat race then getting a good launch in the main, however, soon crashed in the whoops – the same section that brought down multiple top riders on the night.

“It was a short night, but I felt good and I’m thankful to be leaving from the crash healthy,” Swoll explained. “I felt good, like I got back up to how I was feeling before the crash at A1.

“I made some good passes at the beginning and felt like I was on that forward charge and the whoops bit me and bit me quick. It’s all good, I’m going into this break with my head down and we’ll get back to being on one of these top three steps.”

Swoll now has a five-week break to regroup and prepare before the 250SX West championship resumes at Seattle, the FC 250 rider looking to elevate himself from 12th in points standings with four races remaining.