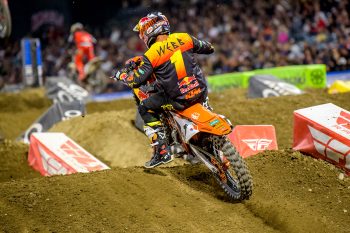 Reigning 450SX champion Cooper Webb experienced another character-building night at Anaheim 3, stating ‘I rode to the best of my ability with what I’ve got’ after finishing P8 in the main event.

Webb qualified 12th leading into the night show, before rising for fifth in his heat race onboard the all-new 2022 Red Bull KTM 450 SX-F Factory Edition.

After fighting inside the top 10 for the entirety the main event, Webb crossed the line a full 40 seconds behind round winner Jason Anderson (Monster Energy Kawasaki). It was another dent in his title defence six rounds into the season.

The result marks Webb’s third eighth-place result in a row, now sixth in the premier class championship standings and facing a race against time in order to turn around his fortunes and claw his way back into this year’s title race.

“It wasn’t the best night, I’m still struggling with some stuff, but we charged hard all day,” Webb reflected. “I got a decent start in the main and kind of got shuffled back.

“It’s not where we want to be by any means, but I rode to the best of my ability tonight with what I’ve got, so we’ll go to Minneapolis and see if we can turn it around.”

Webb currently sits 31 points in arrears of red plate-holder Eli Tomac (Monster Energy Star Racing Yamaha), yet to return to the podium after beginning the season in second position at Anaheim 1 in January.

Round seven of the 2022 Monster Energy Supercross Championship takes place this Saturday at Minneapolis, the first east coast round of this year’s series.