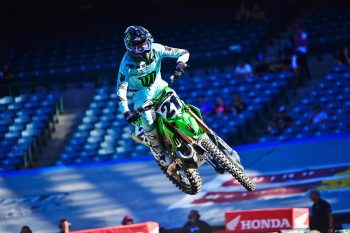 Qualifying at Anaheim 3 has been led by Jason Anderson in 450SX this afternoon, with Christian Craig proving dominant so far today in 250SX West.

A lap in the closing moments saw Monster Energy Kawasaki’s Anderson take the top spot with a flying 56.700s lap-time, which placed him 0.072s ahead of Eli Tomac.

Red plate-holder Tomac was first into the 56s before Anderson struck, the Monster Energy Star Racing Yamaha rider ending the session in P2.

Notably outside of the top 10 was defending champion Cooper Webb (Red Bull KTM) in P12, with Ken Roczen (Team Honda HRC) one spot further back in 13th. 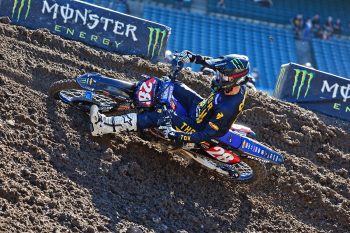 Current points-leader Craig was comfortably quickest in both of this afternoon’s timed 250SX West sessions, ultimately setting the benchmark at 56.813s late in Q2 – a full second clear of the field.