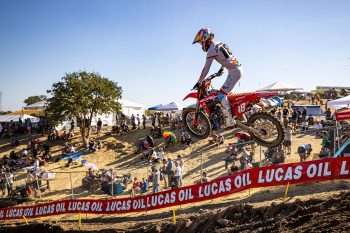 MAVTV Motorsports Network will become the primary broadcast partner of Lucas Oil Pro Motocross Championship in 2022, including the addition of a global streaming service.

As part of the series’ milestone 50th anniversary, MAVTV will provide the most extensive live broadcast schedule in American motocross history.

The championship will be showcased on MAVTV’s over-the-air network in addition to introducing Pro Motocross to the subscription-based MAVTV Plus global streaming service for the first time, where both monthly and yearly subscribers will have on-the-go access to watch the season unfold from their mobile and streaming devices.

“The opportunity to enhance our partnership with Lucas Oil and unify our broadcast efforts with Lucas Oil Production Studios was something that will serve the best interest of our sport, our athletes, teams, sponsors and – most importantly – our fans,” said Tim Cotter, event director of MX Sports Pro Racing.

“MAVTV Motorsports Network has provided the foundation for live coverage of the Pro Motocross championship for many years, showcasing the first motos of every national in their entirety. Now, with MAVTV as the series broadcast partner, we have an unprecedented opportunity to provide comprehensive live coverage of all 24 motos of both the 450 Class and 250 Class during our landmark 50th anniversary season.

“Beyond that, we can also provide an exclusive global streaming platform in MAVTV Plus that provides on-demand access for not only our domestic fans, but also a very significant portion of our international audience, including the native countries of our respective defending champions in France and Australia. We are incredibly eager and excited for the season ahead with Lucas Oil and MAVTV.”

The Lucas Oil Pro Motocross Championship has been title-sponsored by Lucas Oil dating back to the 2009 season. The longstanding partnership, which will enter its 14th season, expanded to also include Lucas Oil’s broadcast division through MAVTV Motorsports Network, dating back to the 2014 season when it became the exclusive broadcaster of the opening motos for every round on the series schedule.

“At MAVTV, we are thrilled to be a longtime broadcast partner of Pro Motocross, bringing world-class motocross competitions directly into the homes of fans since 2014,” said Dan Teitscheid, president of MAVTV Motorsports Network.

“With the addition of Pro Motocross to our MAVTV Plus streaming service, fans can now enjoy all the race action live and on-demand from anywhere. We couldn’t be more excited to elevate our subscription service and reinforce our partnership with the top off-road motorcycle racing series.”

MAVTV is available throughout the US and in 22-plus countries worldwide on a total of 220 providers across cable, satellite, telco and digital broadcasting platforms. A full list of providers, shows and scheduled broadcasts can be found by visiting www.mavtv.com.

Additionally, MAVTV Plus offers both monthly and yearly subscription options for enthusiasts around the world, where $6.99 a month (limited time offer) or $99.00 for the year will provide live and on-demand access to the Lucas Oil Pro Motocross Championship. A full rundown of plan options, live events schedule, on-demand programming and more can be found by visiting www.mavtvplus.com.