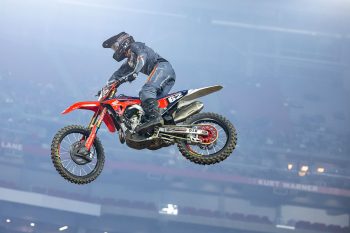 Friese has been at the center of controversy in Monster Energy Supercross since stepping down from 450SX to 250SX West for 2022, most recently taking red plate-holder Craig down in race two at Glendale’s Triple Crown.

With Friese – a mainstay at the MotoConcepts team – receiving a written warning from the AMA and being put on a six-month probation, Genova moved to outline the team’s position on what played out in round five of the season on Saturday night.

“After close review by the MCR team and AMA, it has been agreed upon that while Vince’s line choice in the sand was not the smartest, there was no intent or malice in colliding with Christian. This is evidenced in the video replay that shows Vince braking hard, causing his rear wheel to slide and ultimately make contact with Christian.

“That said, the entire MCR team and I are relieved that Christian wasn’t injured in the crash, but also remorseful for how things transpired in Glendale last Saturday for all parties involved. Vince has personally contacted Christian to address the situation and express there was absolutely zero intent to make contact or knock Christian out of the race.

“MCR understands that Christian is the premier rider in the 250 West class and is easily favored to win week in and week out. As the team owner, I want to make it very clear that in no way do I endorse, promote or agree with any malicious or dirty act of conduct by my riders on or off the track. Our goal as a team is not to take out the current points-leader and hope things turn out good, but to get great starts, race hard and clean, and secure the best results possible.

“While there are varying opinions and perceptions of MCR and Vince Friese, those who know us know our commitment to professionalism is first and foremost. Our team is always striving to provide exemplary representation for our sponsors.”