‘Not the night we wanted or needed’ – Plessinger 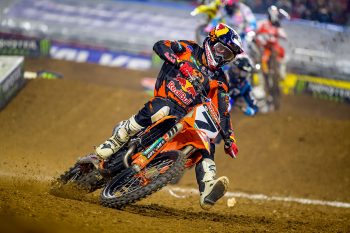 Red Bull KTM Factory Racing’s Aaron Plessinger labeled the Glendale round of Monster Energy Supercross as ‘not the night we wanted or needed’ in claiming 11th overall, still recovering from crashing out of the prior weekend.

Plessinger spent the majority of last week leading into the first Triple Crown of the season in recovery after his fall at Anaheim 2, suffering from a lack of bike time as a result.

“This was not the night we wanted or needed,” Plessinger stated. “I spent the week off the bike – I tried to ride but couldn’t really – and it kind of showed here tonight. I didn’t really get the starts I needed out there and I was struggling in some places, but I’m going to go back do some homework, be healthier this week and just try to come back strong at A3.”

As Plessinger alluded, poor starts didn’t help his performance throughout the Glendale night show, having to work his way forwards in each of the three outings. He finished with a 12-10-10 scorecard, now looking to return to early-season form that carried him to P2 at Oakland’s second round – the last two outings being the lowest-scoring for the KTM newcomer.