Monster Energy Star Racing Yamaha’s Eli Tomac made it two victories in a row at round five of Monster Energy Supercross to extend his advantage with the red plate, as Hunter Lawrence captured his first win of 2022 with Team Honda HRC in 250SX West. Both riders were available to the media following the race for this Debrief interview feature. Eli, this is your second consecutive overall win of the season. How good does it feel to now start gaining that momentum behind you and this team?

It’s great, we started it with last week where I felt like I was finally where I deserve to be, in the front of the race or at least contending for the front of the race – it just feels really good to do it again. These Triple Crowns, they are long nights, especially come the third round it’s like, ‘alright, we have to go do it again’. Thankfully, I put up those two good scores right away. That was my mindset tonight, put up the good score in the first one and then just try to maintain from there and do what we can do. Had two holeshots too, so that was awesome. A lot of people don’t expect that from me, but we did it and it was cool.

Did you expect that from you?

No, not two [laughs]! I just had good starts and I had a good gate too. That paid off, having the fast qualifier for that gate. Overall, just a good night.

One of the biggest storylines from the off-season was you switching to Yamaha. When in your heart did you know that this experiment worked? After San Diego? Pre-season? When did you know that you made the right decision?

Pre-season, of course. I felt great, I felt awesome. Then Anaheim 1, I was off, main event time… it wasn’t great. Then I’m like, ‘okay, we have work to do’, but we kept improving and I knew we could get there. By San Diego, I knew I was just a tick away from finding something that we could get to the front of the race with and be in contention for the front of the race. It took a few rounds. After Anaheim 1 I had a couple questions, for sure, on my mind.

When the announcement first came that you were going to leave Monster Energy Kawasaki to go to Star Racing Yamaha, the question was asked the reason behind it. Pretty much you just said it was going to be easier to win on this motorcycle. Back-to-back wins right now, it looks good. Is this thing just easier to win on or is there more changes the team let you make with the bike?

Right now, I’ve gotten to the point where it is just really good. Moto one and moto two tonight, actually moto two specifically, I felt like I had velcro on my tires. It was really… it was a fun race to ride. This is one of the best bikes I’ve ridden in Supercross, so in that aspect, it’s really exciting – it makes you feel good.

There’s a maturity and an effortlessness that we’ve seen with your riding, that I haven’t really seen before. How much do you contribute that to the bike and how much do you say would be kind of your mindset in this season?

A lot of it is just feeling like you’re in the right spot. When you’re not fighting things and you’re just riding. The days that you feel like you’re at the practice track. It takes a lot of work to get there, but once you’re there, we’re feeling good. Like I said earlier, moto two, I felt one of the best I’ve felt on a Supercross track in a long time, so, it’s exciting for us.

You had mentioned coming out of A1 that you had some work to do with the team to get the bike to where it needed to b and then you just mentioned that it’s as good as it has ever felt. What were the kinds of changes that you were making? Were they chassis changes, engine changes?

I can get into it a little bit. One was starts, I was not consistent at all on my starts, so finally figured that out. Then a little bit of gearing things and figuring out what feels right and what feels good through the whole moto. That’s all I’m going to give you…

With a little bit more newfound freedom with the new team, do you feel like it’s also making you a better tester?

There’s freedom there, but there’s also the guys that are working on the bike, making the changes. It’s people behind the scenes too that’s making this all work.

We missed the Glendale event last year. It was obvious that the reception was there, the fans turned out. How did it feel to be back in Glendale, and how would you describe the atmosphere racing the triple crown tonight?

I thought we had a great crowd. The pits were packed, I thought it was the most jam-packed pit party we’ve had this year. Obviously, the stadium was pretty full. This place is huge, it looked really full to me. A little bit of the upper-deck wasn’t there, but it was a big turnout for us and people were excited. When you miss a year, those fans are excited to get back to racing and as always for us it feels good to have them back.

We talked a ton obviously about the motorcycle. It also seems like you’re really happy with the personnel, the people around you. Did you know that you would get that going to this team or is that actually like a bonus, pleasant surprise of how much fun you’re also having over there?

I knew a few people there, but at the same time, half the people there I didn’t know either, so it was a bit of an unknown – it’s a good environment. For this stage in my career, it was a perfect fit for me to go down to Florida for pre-season time and ride with different guys, something new to do and look at. 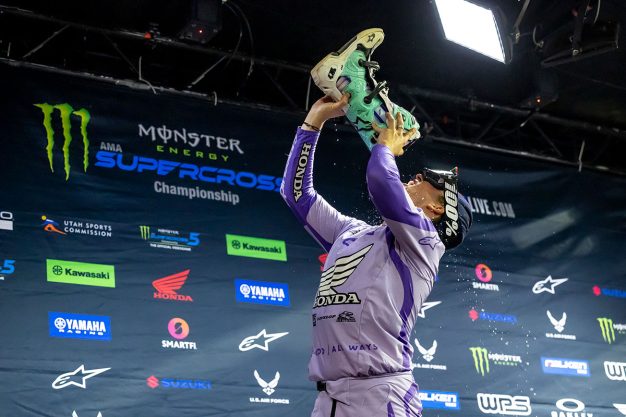 Hunter, you won the race, take us through it.

It was a wild night, an exciting three races. It was my first-ever Triple Crown, but at the same time like I thought it was going to be tough, more endurance side of things, but it was really three sprints. I had no idea what to expect going into it, it was my first was one. It was cool, three mini heat-race main events or whatever you want to call it. Its weird, when you go 2-1-2, right after I didn’t actually feel like I won it because of the moto scores, but yeah crazy night, stoked!

You’ve talked about getting a better start for the night’s racing and maybe being more aggressive. Timed qualifying you looked awesome, you got the top spot. What about the race, where are you at 1-10 in the season with your capability?

The day show was really good, one of my best ones yet which was awesome, great to try and carry that momentum into the night show. It’s tough because I feel like anyone but the majority of the top five guys can sprint at qualifying pace for 10 minutes – the breaks are long enough to kind of regroup yourself. If you are not super-fit, it wasn’t really where someone who has done the hard yards really comes out. Yeah, the starts were better to an extent, they weren’t holeshots… Christian pretty much had three holeshots. There’s still that to work on, so we are going to go back and keep working, for sure.

Do you think you made some gains in putting some claws into Christian, giving him a bit of a warning that you are there?

For me, not really, but Vince [Friese] maybe [laughs]… It wasn’t really me tonight, I’m not going to sit here and say it was. First one, when I got into second he had a good gap and I was okay, ‘save it’, I was not likely to pull five or six seconds in on this short time. Second one, it obviously happened. Last one I was pushing, sprinting, it was tough everyone was really similar in speed, I just did the best I could and it worked out tonight.

Your consistency and poise this season has been super-impressive. I just wanted to know how nice does it feel to finally see that pay off with an actual win?

For sure, it’s cool. It’s such a unique night because anything can happen, it’s like an extended outdoors day, the two motos go towards one, except the three motos go towards one. It’s crazy, it didn’t feel like a traditional Supercross for me, as I’m so used to one main event, one start, one shot. Yeah, I’m looking forward to next weekend, obviously, I want to do it on a proper night as well. I want to get a holeshot, that’s my little goal for what I want.

First main, there were a few times I saw you going double-double-double in that long rhythm section. Was there a reason you decided not to go triple-triple – track conditions?

It wasn’t quite sure. I mean double-double-double is so painful, it just feels like it is never-ending. That turn was getting tricky, I was stupid because the rut I was taking was getting really choppy, but I was too stubborn to try another one. I would not get the drive, I would come up short or I would back out at the last second.

You did the Australian traditional ‘shoey’ on the podium there, but out of the boot. From the reaction from when it actually hit your mouth, there must have been a lot of sand n that boot because it didn’t look like it was much fun…

The dirt was actually the enjoyable part – the champagne tastes so bad! I don’t know if it would taste much better out of a glass, but it wasn’t really pleasant. With Daniel [Riciardo]’s gear, it’s his tradition… every time he is on the box he does a shoey. I thought, ‘why not?’, we got the win, what better time to do it than then? It was for Daniel.

I’m sure you saw the crash between Christian and Vince. When you are in second and third going for that pass, does that play with your head at all? What are your thoughts making that pass?

I’m not sure what you mean, there wasn’t really a move for me to make the pass as I watched it all unfold, like literally right in front of me. From my perspective, it was easier obviously, because you didn’t have to pass anyone.

I meant like in the third race, when you are following Vince, after you saw the crash in the previous race…

Yeah, you have got to be strategic with where you pass him and anyone else that is really aggressive, you try to make the pass in an area where there’s not a retaliation spot in the next turn or there is somewhere you know you are a bit faster than them. Yeah, definitely, the pass does become more strategic, for sure.