Turnaround results in career-best for Stewart in Triple Crown 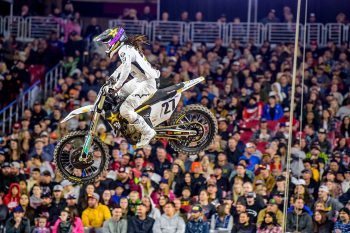 A mid-week turnaround led to a career-best result in the Glendale Triple Crown for Malcolm Stewart, claiming a convincing second overall for his maiden podium since joining Rockstar Energy Husqvarna.

Stewart went 3-2-4 across the three races on Saturday night to trail Eli Tomac overall, which comes following a trio of fifth-place results between rounds two and four in a sign of newfound consistency.

“The first couple rounds we were just learning the bike, putting it in the race conditions – you start to learn how the motorcycle works and stuff,” recalled Stewart. “I feel like we did a really big turnaround this week. I feel like we really just went back to the basics, when we first got on the bike and I felt like that really improved everything.

“Sometimes you get shied away, you’re doing so much testing and stuff and you kind of just get off a little. I feel like everything started to get back correctly, our starts were really, really good. I think this Triple Crown only helped me get more data for the motorcycle.

“We’re just slowly getting the process, but I think this was a big turnaround for us. We’ve been searching, we’ve been on the edge… Three fifths in a row coming up into this weekend, so we were right there. I feel like this Triple Crown, if anything, helped me out. Just going to keep this momentum going and get back to work Monday and keep it going.”

The new generation Husqvarna FC 450 hasn’t been any major obstacle over the opening rounds, according to Stewart, as he adapts from being aboard a Star Yamaha last year. Going back to the basics was part of his elevated performance this weekend.

“I feel like the bike is great, honestly,” he continued. “I feel like it’s just more learning the motorcycle… every motorcycle is different. Of course, aluminum frame to a steel frame is going to be a little bit different. I felt like this week, we made a massive change, basically went all the way back to the basics and I feel more comfortable where Mookie is coming back in the whoops.

“I feel great. Again, it’s just an overall package – you’ve got to get start, you’ve got to run up there. The field is deep now, anybody can win on any given night, so it’s about the start and just ride your race, just be smart out there.”