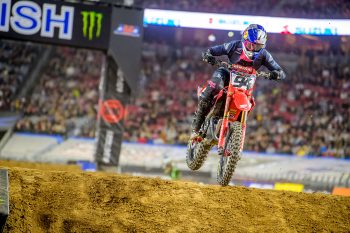 Reverting to last year’s set-up for Glendale saw Ken Roczen and Team Honda HRC encounter mixed results in the first Triple Crown of the year, continuing to search for an optimal setting after finishing fifth overall.

Roczen began the season with a commanding victory at Anaheim 1, but has largely struggled to repeat that front-running form since. His strongest finish has been P5 on the weekend, going 4-6-7 in the three 450SX races.

“The Glendale Triple Crown was another rough one on my end,” commented Roczen. “My starts were mediocre at best and, with those types of races, it’s tough to make something happen. I feel like I wasn’t riding like myself, in general I wasn’t feeling comfortable out on the track. I’m still working to try and get everything together, but Glendale was definitely not it.

“I got fifth overall, so it was actually nice to make it through the mains without going down. We definitely need some work, I’m trying to get consistent during the week and gain some confidence, but we’re still figuring out the bike a little bit. We went back to my set-up from last year – it’s good in some areas, but also creates problems in others and my starts with it weren’t that great.

“I’m still working on myself and with the team to bring it on the weekend. We haven’t really had the greatest test days during the week, so then going into the weekend and trying to be super-confident and trusting in my abilities is really tough to do. We simply have to be better and we’re working on it. We’re going to go into another week of training, figure some stuff out and head on to Anaheim.”