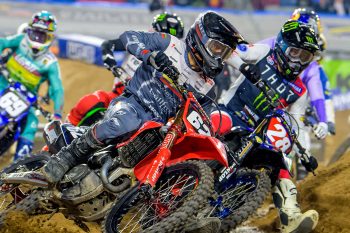 Craig has been on the receiving end of Friese’s aggression on multiple occasions and, despite being able to climb back to fourth position in race two, this latest contact almost certainly cost him the overall on his way to P2 on Saturday.

However, the Monster Energy Star Racing Yamaha’s frustrating with the fast-starting Friese continues to build considering his history over the much of the past decade, which has been cast back into the spotlight since he stepped back to the 250 class with Smartop Bullfrog Spas MCR Honda in 2022.

“I think everybody knows how I feel about that situation – Vince is gonna Vince,” Craig stated. “It’s super-frustrating. I’ve had so many encounters with him and it’s like I’m always on the other side. One year at Monster Cup he cleaned me out and broke my hand, nothing happens. Then this happens, we’re wide open in a sand corner and he comes out of nowhere and we clip ‘bars and I go flying into… I think I almost hit that wall.

“I think something needs to be done, I think it’s dangerous – that should not be done. It’s one thing when he’s faster and he’s trying to pass people, but when someone is trying to pass him, it’s dangerous. He’s cross-jumping people, he’s doing what he did to me tonight, so I’m very sour about it. But, all I did was I shook it off and somehow came back to fourth.

“[It] seems like the only thing stopping me is people cutting me off or taking me out. It happens, it’s racing, got to move on. I was super-heated after that second one… I had AMA in the truck and I’m like, ‘you guys got to do something’. They were just assessing, they assessed the situation and he was back on the line. I don’t know, I’m not AMA – that’s up to them.”

Craig then moved to question the actual ‘penalty’ of being placed on probation: “I feel like probation doesn’t really do anything to riders, so we’ll see. It’s frustrating, but I can’t do anything about it now. It’s done, over with. It’s in AMA’s hands and we’ll see.”