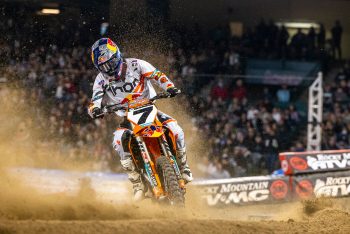 Plessinger made a strong start to round four of Supercross, securing a season-best heat race result in second before an average start in the main event left him with work to do from 11th on lap one.

After making his way into the top 10 by the second lap, the number seven fell heavily in the sand, limping away in a visible amount of pain and the concern for major injury evident.

“I actually started off pretty good,” Plessinger commented. “I felt really good on the bike, had the best qualifying and just felt the most comfortable I have so far. After a solid heat race, I was en route to having a really great night, but I didn’t get the greatest jump on the start of the main and it kind of all went downhill from there.

“I was in the back battling and then I tried to go for one of the outside passes and ended up smashing a hay-bale and landed on the ground. It ended the night for me but nothing is broken or injured too bad, so we’ll be back and ready to rumble in Phoenix.”

Plessinger has experienced an up and down debut season onboard the KTM 450 SX-F Factory Edition, ninth at A1 before a breakout podium at Oakland, from there finishing P6 at San Diego with a DNF at A2, now 10th in the points standings heading into round five of the Monster Energy Supercross Championship at Glendale.