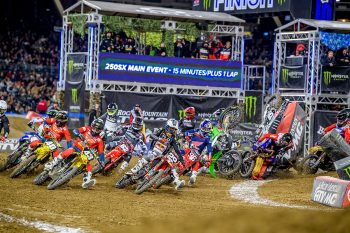 The 250SX podium finishers in San Diego have shared their take on the first turn pile-up that saw points-leader Christian Craig go down, with both Hunter Lawrence and Michael Mosiman involved.

Craig and Lawrence started side-by-side in the main event, the latter appearing to get a better run towards the first turn from the outside before his rear wheel made contact with Craig.

There were a variety of opinions and theories post-race in regards to the cause of the crash, however, no animosity between the top three was expressed when they shared their views of the race-defining incident.

“We all kind of bunched up at the first turn,” Craig reflected. “I’m pretty sure it was Hunter’s back wheel… he went left and I tried to grab the front brake and I hit his back wheel and went the other way.”

While Monster Energy Star Racing Yamaha’s Craig went down and was able to recover to a heroic third, Lawrence maintained second from the opening lap to the end of the race for his third-straight podium result.

“I went down the straight and took a hard left on everyone [laughs],” Team Honda HRC’s Lawrence joked. “I didn’t… I haven’t seen the replay to be honest. I am worrying about other guys and where they are, but I have my set braking points going into the turn, so that was kind of all that went into that really.

“I only found out that Craig was down when my mechanic told me on the third lap or two laps in. I’m not really worried about what is going on behind me, just trying to race forwards.”

Race-winner Michael Mosiman (TLD Red Bull GasGas) started to the outside of Lawrence and Craig, also appearing to get a better launch and drive than his rivals, strangely taking the blame as the cause of the incident in an entertaining press conference afterwards.

“It’s a tough take, I watched the replay guys and it was kind of my fault,” Mosiman stated. “I got a sweet start, you were right next to me [pointing at Hunter Lawrence], you’re a sweet starter, every start you do is sweet [referring to Craig].

“I had the nose and it’s like, ‘what am I going to do if I have the sweet start and clear start, am I just going to go outside?’ No that’s stupid!

“I go to the inside because I can and I’m first one there and Hunter right next to me had nowhere to go, then you [Craig] were on the inside of him, just all bunched up. Because I was on the outside and had a good start, my only option is to close it off.”