‘I think I proved a lot of people wrong tonight’ – Craig

Red plate-holder regroups from last to third in spirited charge. 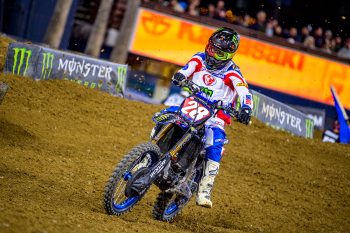 In recovering from a first turn fall that resulted in remounting at the rear of the field, Monster Energy Star Racing Yamaha’s Christian Craig stated ‘I proved a lot of people wrong tonight’ after charging to salvage a podium.

Craig rode a near faultless opening two rounds of Monster Energy Supercross, securing victories at both Anaheim 1 and Oakland before a fall in a turn one incident at San Diego marked the first real blemish on his 2022 season.

The red-plate holder however then delivered a champion’s performance, charging through the field to ultimately reach third position and importantly retain the championship lead, now holding a six-point advantage over Team Honda HRC’s Hunter Lawrence.

“From my point, we all kind of bunched up coming into the first turn and I’m pretty sure it was Hunter’s back wheel… he went left and I tried to grab the front brake and I hit his back wheel and went the other way,” Craig recalled.

“I put my head down, I think I proved a lot of people wrong tonight, my fitness showed and I was able to dig deep, to come from last to third is nothing to be ashamed about. We will see – this championship is getting fun now.”

With three rounds completed, Craig has demonstrated sheer pace, composure and consistency in his bid for an elusive 250SX West crown, the opportunity to claim a third win of the season coming this Saturday at Anaheim 2.