Team Honda HRC’s Chase Sexton has broken through for his maiden 450SX main event win in San Diego, executing a flawless performance to signal his intentions for 2022.

Sexton wasn’t to be denied this time around at round three of the season, starting up-front, passing into the lead by lap four and he was never headed in going on to a 6.001s win.

Behind him, heartbreak for Oakland winner Jason Anderson (Monster Energy Kawasaki), who had made his way into second – unlikely to challenge Sexton – from as far back as P8 at the conclusion of the first lap, only to experience a bike problem just past halfway that slowly dropped him back down to order to eventually finish in ninth position.

Sixth was the end result from Aaron Plessinger (Red Bull KTM) as he worked forward from outside the top 10, while Ken Roczen (Team Honda HRC) ended up seventh after crashing out of podium contention, red plate-holder Justin Barcia (TLD Red Bull GasGas) eighth after he also went down mid-race. Initial leader Musquin completed the top 10.

In the point-standings, it’s now Tomac who holds the red plate despite not yet winning a main event, one clear of Sexton and defending champion Webb, with Barcia dropping to fourth and Plessinger fifth. Anderson, meanwhile, is only six points down in P6 leading into Anaheim 2’s fourth round of Monster Energy Supercross. 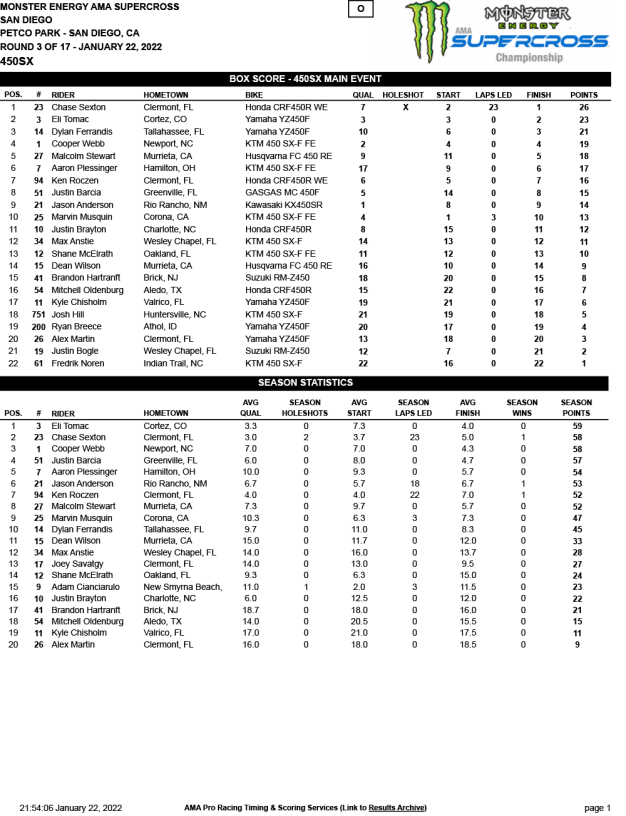