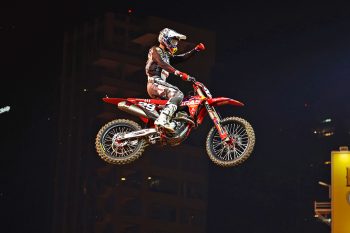 A first-career 250SX victory was captured by Michael Mosiman in a San Diego thriller, the TLD Red Bull GasGas rider holding on to edge Hunter Lawrence after Christian Craig crashed in a first turn pile-up.

The winning streak of Craig was broken in a thriller at Petco Park, with Mosiman holding on to fend off a determined Lawrence for position in a remarkable first main event victory.

With the likes of Craig, Jo Shimoda (Monster Energy Pro Circuit Kawasaki), Garrett Marchbanks (Muc-Off FXR ClubMX Yamaha) and more down in the first corner, it quickly became evident that the opportunity was there to strike, but just how far could Craig climb back up the order?

The answer was third. And it was another defining ride in his bid for the title – into the top 10 by halfway and picking off positions from there. His final pass into podium position came by Vince Friese (Smartop Bullfrog Spas MCR Honda), known to be relentless in his challenge for position, let alone the podium, but Craig made it successful.

Up front, Mosiman was under all kinds of pressure from Team Honda HRC charger Lawrence in the closing stages, until the latter went down in the whoops while trying to make a move amongst lapped riders with a minute and a half to run, remounting and then getting back onto the rear of Mosiman.

He didn’t quite get there though, finishing in that order and split by only 1.361s as the checkers flew, with Craig over 20 seconds back in his gritty podium effort. Fourth was Friese, with Shimoda rebounding to fifth – also impressive.

Meanwhile, Marchbanks didn’t end up finishing following his involvement in the first turn incident, going out after 10 laps. Craig now leads the points by a margin of six points over Lawrence, with Mosiman a further five back heading into Anaheim 2’s fourth round of 2022 Monster Energy Supercross next weekend.