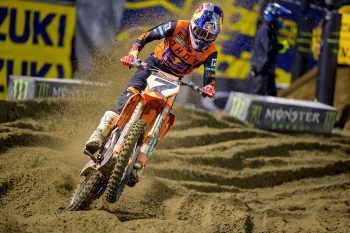 The ever-popular Aaron Plessinger had a vastly improved second outing with the Red Bull KTM team in Oakland, crediting a setting overhaul that helped lead to a podium turnaround.

Plessinger made a relatively quiet KTM debut at Anaheim 1, finishing the opening round in P9 and appearing out of sorts early on prior to making progress in the 450SX main event.

Round two saw an immense step forward, the number seven finishing third in his heat race before delivering a standout performance in the final – pressuring eventual winner Jason Anderson (Monster Energy Kawasaki) at one point to ultimately claim P2.

“[We changed] pretty much my whole suspension set-up,” Plessinger explained. “I don’t really know specifics… everything suspension-wise was swapped up and changed a little bit. Last week was a little weird for me, but we rebounded.

“It handled everything really well tonight, we will maybe tweak some stuff during the week, but I don’t think I’m going to stray too far from what I have got right now. Feels like I’ve got a good set-up, everything is great and is going as planned right now, so we will keep trucking.”

Despite stating that he wasn’t 100 percent ready for Anaheim on race day, Plessinger’s podium moves him up to fourth in the 450SX points standings as the 2022 Monster Energy Supercross Championship heads to San Diego this Saturday for round three.