Roczen concedes ‘we have to get better’ in the whoops

Opening round winner still in title-race despite 13th in Oakland. 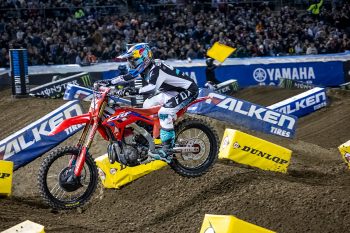 A difficult night in Oakland for Ken Roczen saw him finish 13th, the Team Honda HRC rider later conceding ‘we have to get better in the whoops’ as he now sits fifth in the title-race after two rounds.

After going down in the whoops and qualifying P9 during the afternoon, Roczen managed to bounce back with second in his heat race, but later endured a tough 450SX main event when he went down early.

“Not really much to say about Oakland,” Roczen explained. “I feel like the day already started off kind of weird and we weren’t really feeling that great on the track, but we did the best we could.

“Chase [Sexton] and I went down pretty dang hard in the last qualifying practice. I got really lucky that nothing worse happened, as Chase kind of used my head as a whoop! It all happened so quickly and it was ultimately just me going down and falling into the wrong spot.

“The heat race was decent, I got second there. Going into the night show I put everything aside and tried to stay calm. We got off to a decent start, but I was probably around fourth or fifth and just struggled in the whoops – we’re just not good enough in them and we have to get better.

“That was a spot that bit me again, and after that, there really wasn’t that much I could do. I finished 13th, but I’m going to keep my head up and charge hard again next weekend.”