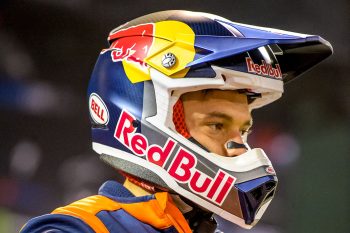 Defending 450SX champion Cooper Webb pushed through sickness during Oakland’s second round of the 2022 Monster Energy Supercross Championship, his end result hindered in finishing P7 on the night.

Webb was unusually quick in timed qualifying, finishing third on combined times at the conclusion of the afternoon sessions.

A difficult start in the main event – outside the top 10 on lap one – made things even tougher for the Red Bull KTM Factory Racing rider, before pressing on to recover for seventh.

“Tonight was a tough one, to say the least… I came down with a cold yesterday and fought through it the best we could today, but definitely didn’t feel great at all,” Webb explained.

“Practice went pretty good with third, but I just tried to save as much as I could for the main event. I had a terrible start in the main and I made my way forward as best I could.

“It was definitely tough battling the sickness, but I’m going to get healthy this week and go into San Diego with a fresh body and fresh slate. As far as the championship goes, we’re still in a good spot so we’ll see where it ends up.”

Despite those challenges, Webb still sits third in the points standings – just three outside red plate-holder Justin Barcia – as the majority of his close rivals have not been able to land strong, consistent results over both rounds.