Direct updates from round two of the season at RingCentral Coliseum.

Follow the 2022 Monster Energy Supercross Championship with direct updates from round two of the season at RingCentral Coliseum in Oakland through Racefeed. 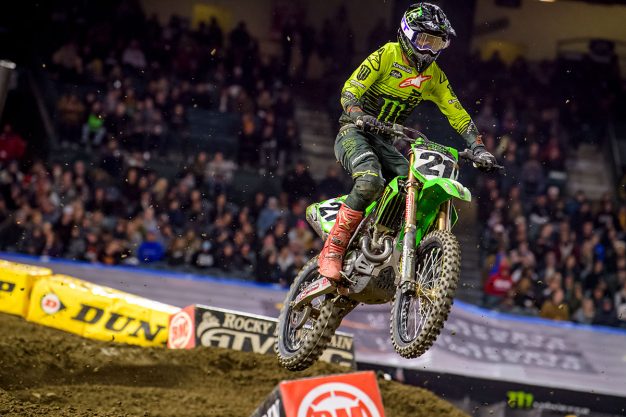 450SX qualifying one:
For the first time since switching to Monster Energy Star Racing Yamaha in the off-season, Eli Tomac topped the charts in qualifying one this afternoon as riders worked down toward the 59s, but didn’t quite get there as Tomac recorded a 1m00.002s lap-time. He was a tenth faster than Chase Sexton (Team Honda HRC), who had topped the free practice earlier. Third was another Star Yamaha in Dylan Ferrandis, with Malcolm Stewart (Rockstar Energy Husqvarna) and last week’s winner Ken Roczen (Team Honda HRC) filling the top five. Defending champion Cooper Webb was improved in practice so far, sixth on the time-sheets, followed by Dean Wilson (Rockstar Energy Husqvarna), Adam Cianciarulo (Monster Energy Kawasaki) despite falling late in the session, Marvin Musquin (Red Bull KTM) and Jason Anderson (Monster Energy Kawasaki), who also went down in the closing stages.

250SX qualifying two:
The second and final 250SX qualifier was topped by Craig – the first rider all day to go beneath the one-minute barrier – with a 59.510s, placing him comfortably ahead of Mosiman. After leading the way in Q1, Mosiman was 0.792s behind Craig, in turn almost half a second up on Thrasher. He and Hammaker were both at 1m00.7s, as Lawrence climbed to fifth this afternoon. Next best was Shimoda, who will be looking to turn his fortunes around this evening, trailed by Garrett Marchbanks (Muc-Off FXR ClubMX Yamaha) after he missed much of the opening session earlier in the day, Blose, Friese and Wageman.

450SX qualifying two:
It was a Monster Energy Star Racing Yamaha 1-2 in 450SX qualifying at round two, Tomac topping both timed sessions this afternoon and setting a final benchmark of 59.108s. Tomac was able to piece the entire track together including both sets of whoops, marginally ahead of teammate Ferrandis at 59.180s. Number one plate-holder Webb was stronger than usual in practice with third position, right there at 59.256s, with Anderson, Musquin, Stewart and Cianciarulo all beneath the 1m00s marker. Opening round winner Roczen went down at the beginning of the session in the whoops and was struck by teammate Sexton, but managed to remount and put in a time for ninth overall, while Sexton went down in the whoops later, but wound up P8 courtesy of his time in Q1. Ninth and 10th in the final outing were Wilson and Shane McElrath (Rocky Mountain ATV/MC KTM WPS), respectively, bumped back a position once Sexton’s earlier lap was slotted in.

250SX heat one:
The opening heat of the night saw Shimoda lead the early laps, until Mosiman made his way through on lap five. Shimoda countered through the whoops, but Mosiman repeated his block-pass on the following lap and made it count this time, going on to win by 1.5s ahead of Shimoda. Finishing third was Hammaker, following the leaders through much of the heat, with Blose a lonely fourth ahead of Cole Thompson (Yamaha), Carson Mumford (BarX Suzuki), Ryan Surratt (Team Solitaire Nuclear Blast Yamaha), Logan Karnow (Kawasaki), Hunter Schlosser (Yamaha) and Dylan Walsh (Revo Seven Kawasaki).

250SX heat two:
Points-leader Craig controlled the second heat to go ahead and win by 8.188s, leading Lawrence across the finish, who was in turn comfortably ahead of Marchbanks. Friese was able to hold off Thrasher at the end, with Thury, Carson Brown (AEO Powersports KTM), Devin Harriman (KTM) and two-stroke-mounted Gared Steinke (KTM) all transferring directly through to the main. Maxwell Sanford (Honda) took P10, with Dilan Schwartz (BarX Suzuki) going down early and again in the whoops, registering a non-finish.

450SX heat one:
Heat two was all Sexton at the front to win ahead of Anderson, who had to overcome Stewart until the latter crashed mid-heat. That enabled Aaron Plessinger (Red Bull KTM) to slot into third position, with Stewart remounting to fourth, Ferrandis fifth. Sixth through ninth featured Wilson, Justin Bogle (Twisted Tea Suzuki) as he qualified for the first time this year, Kyle Chisholm (Yamaha) and Max Anstie (Rocky Mountain ATV/MC KTM WPS), who made an aggressive final turn pass on Ryan Breece (Yamaha) for the final transfer spot.

450SX heat two:
Continuing his form into the night show, Tomac was the class of 450SX heat two and took the lead from Cianciarulo on lap two, then went on to cruise to victory by 3.309s over Roczen, with Barcia next in line. Early leader Cianciarulo dropped to fourth at the end of the heat, still not at 100 percent with his shoulder separation, but still comfortably ahead of Webb in P5. Musquin, McElrath after running as high as second, Savatgy and Hartranft were the final direct qualifiers. Martin is heading to the LCQ after finishing 10th, with SGB Unlimited Honda teammates Alex Ray – a heavy crash – and Cade Clason – injured knee from practice – both being ruled out.

250SX LCQ:
The 250SX last-chance qualifier saw Wageman go through ahead of Schwartz, with Dylan Woodcock (Husqvarna) and Jerry Robin (GasGas) securing the final positions in the upcoming main event.

450SX LCQ:
Martin put in a solid performance through the 450 class LCQ to make his first main in the premier class, stretching away by 4.928s ahead of fill-in Josh Hill (Team Tedder Monster Energy Lucas Oil KTM), Justin Starling (GasGas) and Joan Cros (Kawasaki). A late attack from Breece resulted in him crashing heavily in the final set of whoops, with Ray also going down earlier and ending his night prematurely.

250SX main event:
There was no denying Craig back-to-back wins tonight, delivering another commanding ride to once again finish ahead of Lawrence and Hammaker. It was Shimoda who led across the line on lap one, before Craig took charge soon afterwards and powered away at the front by 5.698s – Shimoda’s night unravelling when he stalled and then went down in the whoops while in P2 on lap three. Lawrence was patient in working his way to the podium, eventually passing Hammaker on lap 11 and that’s how they would stay. Fourth came Mosiman after making his way by Thrasher mid-race, with Friese next in line for sixth position. Shimoda finally crossed the line in seventh, as Marchbanks, Blose and Wageman in eighth through 10th places.

450SX main event:
The first couple of laps were led by the fast-starting Cianciarulo, before teammate Anderson had moved his way from third into the lead and stayed there for the duration. It was Plessinger who went on the move next and climbed into the runner-up position, but Anderson was able to remain composed at the head of the pack to control things in P1, topping Plessinger and new red plate-holder Barcia – who also went a tear in the middle stages – on the podium. Finishing fourth was fastest qualifier Tomac after climbing from eighth on lap one, with Stewart and Ferrandis next in line – both coming from well outside the top 10 early on. Defending champion Webb started 14th and never really got going to his standards for seventh, with Musquin, Sexton who stalled in the later laps, and Wilson the top 10. Cianciarulo eventually faded to 12th behind Savatgy, while Roczen was knocking on the door of the top-five when he went down early on, plummeting to 16th and then working his way back to 13th by race’s end.