Q&A: What we learned from Anaheim 1

Dissecting results following the opening round of Supercross 2022.

A return to the traditional venue for the start of the Monster Energy Supercross Championship at Anaheim saw the 2022 series get off to a frenetic start. MotoOnline answers some of the key questions that arose from an intense night of racing in this edition of Q&A. Q: Is Ken Roczen making a habit of trying to downplay his form before the season starts?

A: Team Honda HRC’s Ken Roczen has now come into the two most recent series – the 2021 Pro Motocross Championship and the 2022 AMA Supercross Championship – being quite vocal about feeling underdone with his preparation, confidence and training, before taking wins in both openers. You’d be forgiven for thinking Roczen was bluffing and trying to shed any short odds, but the two-time motocross champion genuinely had a horrible lead-up to Anaheim 1. A mysterious respiratory illness (it wasn’t covid-19) in December saw him have minimal bike time leading up to A1 as he desperately tried to shake any health issues before the season started.

Q: Who would be the most concerned with their pace and form?

A: Monster Energy Star Racing Yamaha’s 450MX champion Dylan Ferrandis had a disappointing start to 2022 with a 16th in the main and will be doing plenty of homework this week before Oakland on Saturday. After placing fifth in his heat, the Frenchman got swallowed in the first turn and completed the first lap in 15th. He worked his way as high as fifth by lap 14, but consecutive crashes on the next two laps saw him tumble down the leaderboard with rear brake dramas as well. People might also be tempted to say Ferrandis’ new team-mate, Eli Tomac, should be worried at being 20 seconds off the pace in the 450SX main. The 2020 champion kept out of trouble all night on his way to a steady sixth in the main, but Tomac is one of those riders who works his way into a championship and generally starts the season in this fashion. In fact, since hitting the 450SX ranks full-time in 2014, he’s only finished on the podium once at the opening round. Other notable mentions… Aaron Plessinger on debut with Red Bull KTM even though his end result was P9 and Justin Bogle, who didn’t make the main with Twisted Tea Suzuki.

Q: Who was the biggest surprise?

A: In the 450s, Team Honda HRC’s Chase Sexton has certainly established himself a legitimate contender for the 450 title with an impressive performance throughout the day. Sexton was fourth-fastest in qualifying, then strode to a win in his heat after dispatching of a fast-starting Shane McElrath (Rocky Mountain ATV/MC KTM WPS). In the main, Sexton piled the pressure on race leader and team-mate Roczen for the first seven laps, before two crashes in as many laps saw him drop back to eighth. He managed to charge back to fifth before the checkers fell, and clocked the fastest lap of the race in the process. Meanwhile, in the 250s, Garrett Marchbanks (Muc-Off FXR ClubMX Yamaha) caught many of the factory racers off-guard with searing form all day. He finished an eye-catching third in his heat, then spent most of the 250SX main in third place, hunting Seth Hammaker (Monster Energy Pro Circuit Kawasaki), before being ambushed by Hunter Lawrence (Team Honda HRC) on the final lap. Despite finishing off the podium, Marchbanks will take a lot of confidence into Oakland this weekend. 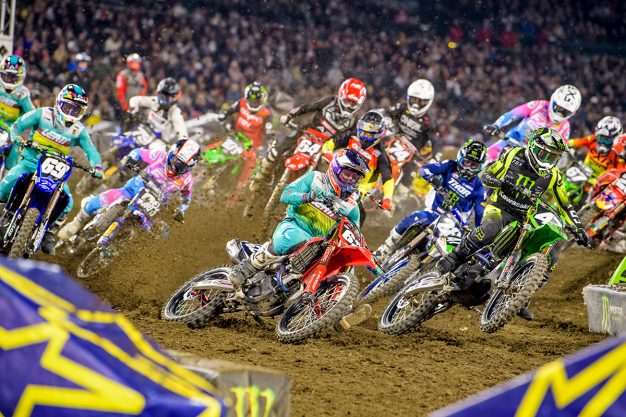 A: New Monster Energy Kawasaki signing and 2018 Supercross champion Jason Anderson looked really impressive in his first hit-out on green machinery and much more-so than his results look on paper. In his heat, fastest of all qualifiers Malcolm Stewart (Rockstar Energy Husqvarna) took him down in the opening lap and he battled from the back of the pack to squeak into the main event, but it was an aggressive pass from Justin Barcia (Troy Lee Designs Red Bull GasGas) in the closing stages of the main that hurt his points. At the time Anderson had methodically worked his way through the pack to third behind Roczen and Barcia, and briefly passed Barcia for second, before Barcia rode him high into the tuff-blocks two turns later. Anderson remounted and finished 10th, while he teammate Adam Cianciarulo rode through an AC separation to feature inside the top three, only to eventually score 11th. In the 250 class, TLD Red Bull GasGas rider Michael Mosiman will be ruing a costly error in the whoops in the opening lap of the main event that saw him fight his way from dead-last to an eventual sixth. Mosiman looked on-point all day, qualifying second behind Christian Craig and comfortably winning his heat race.

Q: Could this be Christian Craig’s year?

A: With the current 250SX East champion (and Monster Energy Star Racing Yamaha team-mate) Colt Nichols now sidelined in 250SX West, this is shaping up to be the year that Christian Craig finally puts all the pieces together and wins his first Supercross crown. There’re still a bunch of talented riders in the class, but Craig’s ability to smash out quick starts and his astounding pace through the whoops, will be a formidable force for the likes of Mosiman, Hammaker and Hunter Lawrence to overcome week-in, week-out. Craig has winning race-craft and has seen it all, so 2022 represents the best chance he’s ever had to finally lift the trophy.

Q: What’s the latest on Nichols?

A: While the team has said he ‘suffered injuries to both arms’, unofficial reports are that Monster Energy Star Racing Yamaha’s 2021 250SX East champion broke both arms in a horror crash in the whoops in the first heat of the night. Nichols was one of the favorites for the 250SX West title, but is now out for at least the Supercross season unless he can make his way back toward the end. He had surgery two days ago, so we expect to soon hear an official update from either the team or Nichols himself soon as to the specifics of the injury and how long his recovery is expected to be. While Craig had a perfect start to the championship, 2022 has been a rough start for the Star Racing team, with 250SX West champion Justin Cooper breaking his foot in training before the season had started and he’s out of action for six months.

Q: Was covid a factor at all to open the new year in California?

A: Surprisingly, not really. Restrictions were limited, the pits were buzzing and the stands were packed with Supercross fans, which made for the most ‘normal’ event since the early stages of 2020. Sure, it’s not back to 100 percent and a group of riders and industry people were forced to miss the weekend after failing their pre-event covid test, which will be something to keep an eye on throughout the season since all unvaccinated credential holders – quite a few from what we understand – are required to produce a negative result prior to every single round.