Late issue costly for Ferrandis in opening round main event 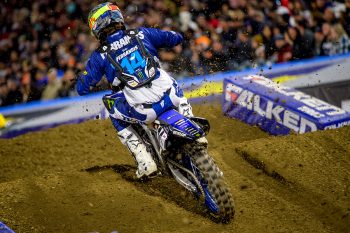 Monster Energy Star Racing Yamaha’s Dylan Ferrandis suffered a costly late issue at Anaheim 1, a moment in the whoops and a crash in the closing stages of the main event limiting his result to 16th.

Ferrandis didn’t make a good start in the final – 14th after lap one – but put the hammer down to climb as high as sixth, before the late issue and crash relegated him down the order. He was also suffering from rear brake fade.

“Anaheim 1 is always a little crazy,” Ferrandis stated. “I was actually feeling pretty good all day – it was my starts that hurt me. In the main event, I got a really bad start, but I moved my way up.

“I was feeling pretty good, pretty strong, and was coming back to the top five. Then I had an issue and tried to come back, but made a mistake and crashed. It was not a really good night, but I know now that I’m capable of riding out front in the 450 class. We’re going to regroup and be ready for next weekend.”

The 2021 450MX champion has proven he has the mental fortitude to be at the pinnacle of competition, now working to apply his success outdoors in Monster Energy Supercross leading into Oakland on Saturday.