Anderson plans to ‘live to fight another day’ after Anaheim 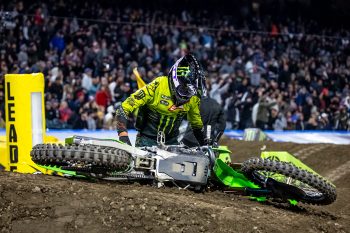 New Monster Energy Kawasaki recruit Jason Anderson plans to ‘live to fight another day’ after being bumped out of podium position at Anaheim 1 on debut aboard the factory KX450SR.

Anderson was impressive to open the 2022 Monster Energy Supercross season in qualifying third, but struck troubles in heat two on his way to eighth position.

The main event saw Anderson climb to third by lap 11 and then put a move on Justin Barcia (TLD Red Bull GasGas) for P2 five laps later, only to go down when Barcia countered and made contact on his way back through. It was a moment that Barcia downplayed and Anderson said it was ‘racing’.

“I definitely think today could have gone better,” Anderson recalled after crossing the finish in 10th place. “My speed was right there with the top guys and I felt like my KX450SR was handling so well.

“In the main, I spent a few laps planning my pass for second and did the best I could to make a clean move and ride away. Unfortunately, I can’t control how other riders respond, but that’s racing. It was a tough one, but we live to fight another day. Time to switch gears and focus on Oakland.”

The 2018 champion is one of the major talking points in these early stages of the season, taking over from Eli Tomac at Kawasaki alongside Adam Cianciarulo after spending the entirety of his 450SX career with Husqvarna.