Addresses contact made with Anderson in race to A1 podium. 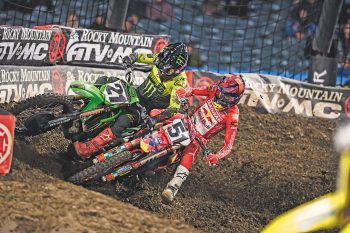 Although he didn’t make it a four-peat at the opening round of Monster Energy Supercross, Justin Barcia has admitted that finishing third will result in less pressure leading into upcoming rounds of the 2022 season.

Troy Lee Designs Red Bull GasGas’ lone 450SX rider Barcia fought his way to the podium in a chaotic Anaheim 1 main event, setting him up in these early stages.

Recent years have seen the 29-year-old start strongly to win the opener in 2019, 2020 and 2021, but he hasn’t been able to maintain that form across 17 rounds. This time around, third position could be an ideal way to commence without carrying the red plate too soon.

“Definitely [less pressure], it feels great… I’m very happy where I’m at right now,” Barcia commented. “It was a wild night of racing. It was definitely tricky, like you guys said, then kind of survival mode toward the end. I wasn’t happy when Cooper [Webb] got around me, but I was able to catch onto his lines.

“I was just trying to jump stuff stupid. I needed to tighten the track up a little and do some smarter lines, so that helped a lot. Got a little tight in the middle there, but all in all, it feels amazing to be on the podium.

“Obviously didn’t get the four-peat – everyone was going on about that – but it feels really good to have that off my shoulders now. I’m just looking forward to the season and the team has done a really good job… It was a great night, I’m really happy with it.

“Obviously, you always want to win. That would be sick, someone’s got to win and Kenny [Roczen] did it tonight. I’m racing against the best guys in the world, so I’m super-happy with the podium position and I feel like I’m in a great place.

“We’re just going to keep chipping away at it, shoot for podiums, obviously go for wins and have fun. Definitely my goal is to be in the fight all year long. That was my goal last year and I think I came up a little bit short, so this year the focus is just being smart, having great races, putting myself in good positions and going for it.”

Following a topical mid-race clash with Jason Anderson (Monster Energy Kawasaki) that saw the latter go down, Barcia played down any major wrongdoing on his behalf. And Anderson later confirmed that he had no issue with the contact.

“It was a great racing pass,” recalled Barcia. “I didn’t hit him too hard – we barely touched and I went on with my way. I think, obviously, he probably would have liked to cover that line better, but the way the ruts were I don’t think he was able to do that.

“I set myself up in that corner where he passed me better for the next section and I was able to stick that. Honestly, he probably would have got me if I didn’t get that spot there, because he was riding a lot better than me, so I had to go for it early. I’m stoked on a good racing pass.

“All the passes today were great racing passes. I always go for it, I think those were all wicked good passes and I hope the season keeps like that. We all respect each other a lot and I won’t carry anything from this… Hopefully the other guys won’t.”