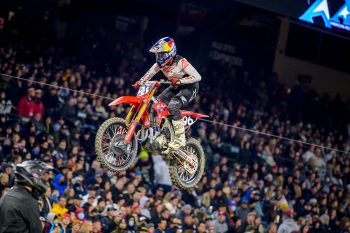 A dreaded start for Hunter Lawrence in the Anaheim 1 250SX main event saw him forced to charge through the pack from well outside of the top 10 and onto the podium in a final lap thriller.

Lawrence had gradually improved throughout the 2022 Monster Energy Supercross opener, but displayed his true form in the final upon slicing his way forward for third position.

“My start was pretty bad, the gate flinched a bunch of times and seven guys hit the gate, so I thought it was going to be a restart because it didn’t drop when it first moved, then I thought alright lets go race,” the 22-year-old reflected.

“Yeah, it wasn’t easy, but just pretty much keep passing guys until there is none in front of you, which the case was third tonight so it’s okay. It was only third tonight, so nothing to jump up and down about, but I feel good and there’s a lot of rounds to come.”

Lawrence had climbed to 10th by the end of the opening lap and charged forward from there, making his way to fourth by lap 10. From there, he pressed on to move onto the podium in a ‘sketchy’ last-lap, but just came up short of stealing P2.

“It was kind of a hail mary last lap to be honest!” he added. “I was like a little sketchy – I landed on a few tuff blocks. I probably could have dive-bombed Seth [Hammaker] a little harder, but I thought I was probably crossing the limits, I thought not necessary.

“I just gave it my all, I knew I was closing in and just yeah, I really pushed those last laps. I knew I was fitter and stronger, so that’s just all it was and I was just going with it. I mean, they’re just like right there, it’s so close so why not go for it.

“It’s not really rolling the dice because everything we do is a calculated risk, but yeah it was so close, so would be like a pussy to just settle for fourth or whatever.”