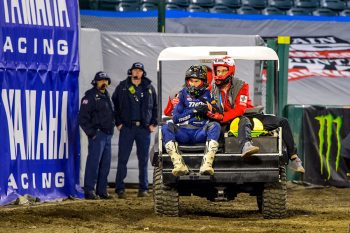 Injuries to both arms sustained in the heat race at Anaheim 1 have ended Colt Nichols’ hopes of challenging for the 250SX West title, due to undergo surgery this week.

Nichols crashed in the second set of whoops while leading his first heat of the 2022 Monster Energy Supercross opener, ending his night altogether.

While details are limited at this point, the Monster Energy Star Racing Yamaha team has announced that he was scheduled to be operated on Monday. An update is yet to be provided.

“Nichols was looking to have a strong start, but unfortunately, the 2021 250SX East champion had a big crash in the whoops while leading the first heat race and sustained injuries to both arms,” a statement from the team confirmed. “He will undergo surgery today and an update will follow.”

It’s been a troubled start to the year for Star Racing, with current western region champion Justin Cooper recently injuring his foot and missing Supercross altogether, while Nichols’ was one of the team’s title prospects on the west coast prior to being injured.

The opening round at Anaheim on Saturday night was dominated by Christian Craig, topping qualifying, winning his heat race and controlling the main event on his way to victory.