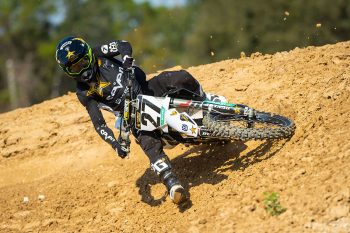 Fresh off the back of switching to Rockstar Energy Husqvarna for 2022, Malcolm Stewart has stated ‘we’ve been grinding the whole time’ in preparation for Monster Energy Supercross.

Stewart spent the 2021 450SX season with the Star Racing Yamaha team, earning sixth overall in the championship and a podium at the penultimate round of the series in Salt Lake City.

The switch to Husqvarna for 2022 marks the first time Stewart has raced professionally for the brand and the 29-year-old appears to have made the most of the off-season to ensure a swift adaptation and position himself for a strong start to the championship.

No longer spending his free time fishing between motos, Stewart will be equipped with the new FC 450 Rockstar Edition alongside the returning Dean Wilson this year. And he’s ready for the gates to drop at the opener.

“We’ve been pretty much grinding this whole time since pretty much this entire off-season,” Steward explained, now part of the Baker’s Factory. “It’s been a big change for me, jumping ship – I mean going out, riding with a whole different group of guys has been great for me.

“For me, it’s the same mindset going into the year, just go out there and do the best that I can and the results will come. I feel that I have a really good group of people that support me this year, and all of the talking is really going to be at the races.”

Stewart will make his first competitive outing in Rockstar Husqvarna colors this Saturday when the 2022 Monster Energy Supercross Championship kicks off at Anaheim, round one of the 17 round 450SX series.