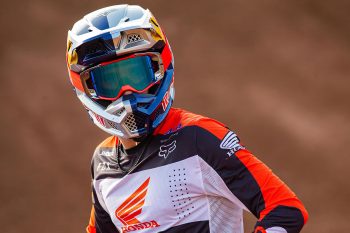 Team Honda HRC 450SX contender Ken Roczen has admitted he has been ‘battling effects’ of sickness through December – not covid-19 – yet draws positives from the 2022 pre-season.

Roczen, 27, used the break to help enhance his preparation by spending some time at the APC Red Bull training facility in Austria and, for the most part, experienced a positive lead-up until getting sick late last year.

“I actually ended up going to Europe this year, more of a business trip than just pleasure, but it fit in there,” Roczen explained. “I went and caught up with the guys together with Blake Savage, my trainer, and went over to the APC training facility which are the Red Bull guys in Austria and that was awesome.

“It’s where I used to go when I was racing GPs three times a year and did a bunch of my training and tests and stuff. I really, really enjoyed going back there and for us it was just going back to the basics, so on the training side of things I was super covered schedule-wise and me and Blake looked at it as a collab a little bit.

“A couple of changes going on there, which was all great and I went as well and saw a doctor over there to try and get some more things figured out and that went really, really well. Everything was going to plan until like mid-December I came down with a gnarly sickness for some reason.

Roczen has a previous history of battling illness, with recent championships impacted by a less than optimal physical condition caused by such.

Still chasing an elusive 450SX crown, the Honda rider enters the year off the back of one of his strongest Supercross seasons to date in 2021, second overall claiming four victories.

The gates drop on the 2022 Monster Energy Supercross Championship this Saturday at Anaheim, where a better reflection of Roczen’s condition will likely be revealed.