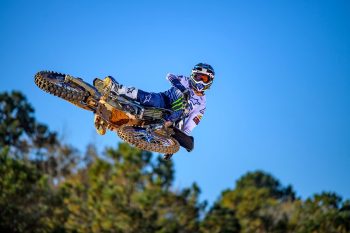 Continuing to adapt to new Monster Energy Star Racing Yamaha surrounds, Eli Tomac has admitted that the group training dynamic is a ‘nice change’ in his preparation for the 2022 Monster Energy Supercross Championship.

Tomac made the switch this year from the Monster Energy Kawasaki team following a six-year stint, partially spending his pre-season in Florida with the Star team.

“It’s new, getting on more tracks I felt was important, getting on different surfaces, different designs, different feel and obviously Star Racing has moved their whole base there,” Tomac explained.

“We’ve been everywhere, we’ve been in Florida, we initially started in Colorado and now we are in California, so we’ve been bouncing around and it’s been really fun.

“I’ve been riding with a group of guys for most of that time, so it’s just been a nice change, before I think I may have isolated myself a little too much or maybe because I’m doing something different now it feels better, but it’s just refreshing that way.

“It’s good, my focus was to get the setting dialled in and come in healthy, and we have done all of those things and just looking forward to it.”

The 2020 Supercross champion ended last year’s 450SX championship P3 overall after scoring three victories, which time to tell if the new environment will ultimately assist him in regaining the crown.

“I’ve always been with like two guys on the track, and now we’ve got like six to eight guys on the track, that’s what is different,” Tomac added. “We have all ridden together, and for the most part we are all on at the same time so that’s new.”

The 2022 Monster Energy Supercross Championship kicks off this Saturday at Anaheim, CA, marking the highly-anticipated racing debut of Tomac in Star Yamaha colors.