Cianciarulo to take what shoulder will give at A1 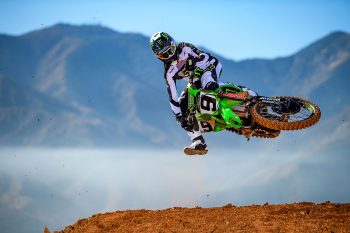 Adam Cianciarulo will take what his shoulder will give when the gates drop on the 2022 Monster Energy Supercross Championship opener at Anaheim 1, only returning to the bike this week.

The Monster Energy Kawasaki rider enters his third season in the premier 450SX category, adopting a measured approach to kickstart his campaign under an injury cloud.

“My approach is always to do what I can, do my best, I’ve kind of taken it day by day and I’ve just got on the Supercross tracks on Monday – it’s the first time I’ve hit any jumps since I had the crash,” he stated. “It’s going to be one of those things where I get in there and see what I can do – I don’t need to go too crazy.

“I’ve got to take what the shoulder can give me and I think it could be a positive mindset for me too, coming in and just getting my feet wet and I feel pretty confident in my starts and I think being up there with the guys will kind of progress me along. I’ll just do what I can.”

Cianciarulo experienced a difficult 2021 campaign, forced to sit out the second half of the season after breaking his collarbone at Orlando 2, before his Pro Motocross championship ended prematurely when he opted to take additional surgery on a troublesome nerve in his right arm.

Two months later, Cianciarulo began his build towards the upcoming Supercross season, a pre-season that although was impacted by the most recent shoulder injury, still provides him with confidence heading into Anaheim.

“I rely on the amount of laps we did in the off-season, I feel like we did a really good job with the bike and with my program,” Cianciarulo added. “I rely on that, and always one foot in front of the other and do the best I can.”