Annual feature highlighting the winners and events of the year gone by.

The 2021 season proved to be an incredibly eventful year on the racing front despite still dealing with the effects of the pandemic and, both in the United States and Europe, there were championships that had us on the edges of our seats. It’s time to look back at some of the great races, moments and personalities of the year as we hand out the annual MotoOnline US Awards. 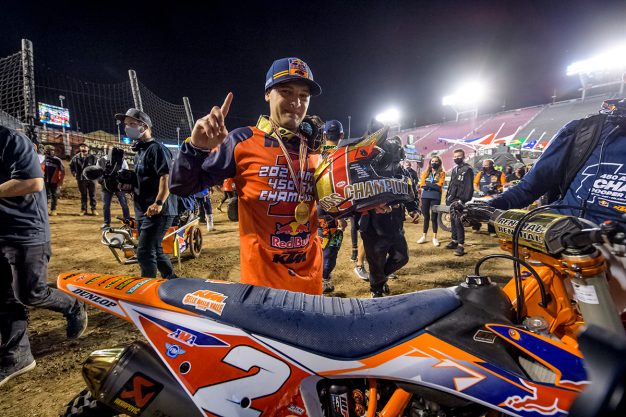 Rider of the Year – Cooper Webb:
2021 proved that you can never discount Cooper Webb. The 2019 450SX champion looked down and out after the first two rounds of the Monster Energy Supercross Championship, but the Red Bull KTM racer refused to give up. A win at Houston 3 reignited his campaign and, when his arch-rival Ken Roczen went on a searing-hot win streak, Webb went on the offensive and upped his game. Webb used all of his racecraft, determination, speed and attitude to get under Roczen’s skin and it worked. A three-race win streak at the Arlington residency swung the momentum in Webb’s favor and knocked the wind out of Roczen’s sails. From that point on, Webb maintained solid results and an imposing on-track presence on his way to recapturing the 450SX championship.

Rookie of the Year – Dylan Ferrandis:
Despite being fresh off claiming the elusive 250 SX and MX double championship last year, the jury was out as to how Monster Energy Star Racing Yamaha’s Dylan Ferrandis would fare in the premier class. It took all of two rounds for Ferrandis to make his mark, with a shock second-place finish at Houston 2. He finished seventh in his rookie Supercross season, but it was the Lucas Oil Pro Motocross championship where the Frenchman really shone. He claimed six out of the 12 round victories and never missed the overall podium, comfortably wrapping the championship up with a round to spare. Even then he didn’t take his foot off the throat, winning the overall at the Hangtown finale with a 1-3 result.

Personality of the Year – Aaron Plessinger:
Back in 2016 we got a taste of Aaron Plessinger’s character when he broke out new dance moves whenever he won a round of the 250SX East championship. After a few years under the radar, AP7 and his exuberant personality returned to the fore in 2021. His infectious enthusiasm and smile radiated most when he took the podium at Daytona, Pala 1 and RedBud, but he’s quickly won a legion of fans with his all-American attitude. And who can forget that classic moment at RedBud where he grabbed an amazing holeshot and casually looked back at the rest of the field!

Series of the Year – MXGP:
As good as the Monster Energy AMA Supercross and Lucas Oil Pro Motocross Championships were, the drama and bar-to-bar racing we witnessed in the MXGP this year was second-to-none. The battles between Jeffrey Herlings, Romain Febvre and Tim Gajser in particular were intense, entertaining and thoroughly unpredictable. The desperation levels between the three racers were so high, that after 16 of 18 championship rounds, just three points separated them. Jeffrey Herlings ultimately prevailed to take the championship, but 2021 will go down as one of the wildest, most entertaining MXGP championships of all time.

Most anticipated motocross model – 2022 Honda CRF250R:
While most manufacturers have chosen to tinker around the edges of their motocross range for 2022, Honda has completely redesigned its CRF250R with a host of changes to the engine and chassis. The overhauled motor produces more low-rpm torque without sacrificing usable top-end power, while the frame updates have trimmed down the weight, improved the bike’s ergonomics and enhanced its handling characteristics. Honda’s also reverted back to a single exhaust system and revamped the clutch and cooling systems. It’ll be in the capable hands of Jett and Hunter Lawrence come the new season!

Top Team – Monster Energy Star Racing Yamaha:
With no less than nine riders camped under their awning, the Monster Energy Star Racing Yamaha easily claimed the prize for having the biggest set-up in the pits. However the star-studded team made good on that investment, bringing home three of the five championships on offer (450MX with Dylan Ferrandis, 250SX West with Justin Cooper and 250SX East with Colt Nichols) and chalking up podium appearances almost every weekend. Next year’s team roster has been trimmed to eight, but has been bolstered by the signing of multi-time champion Eli Tomac. 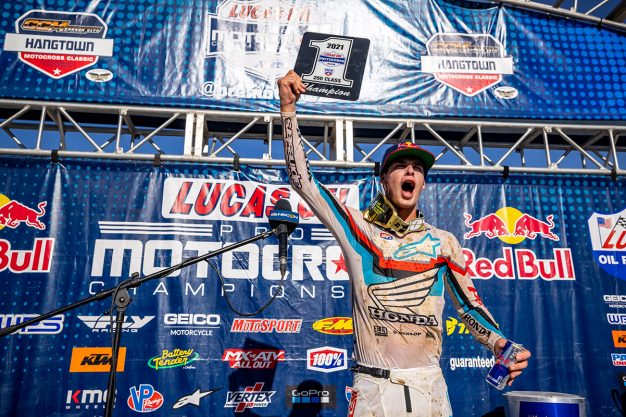 Best Event – The MXGP decider:
After an intense MXGP championship, four-time world champion Jeffrey Herlings (Red Bull KTM) and former world champion Romain Febvre (Monster Energy Kawasaki) entered the final GP at Mantova separated by just three points, with Febvre having the slight advantage. In the opening race Herlings muscled his way past his rival and take the win, tying the two on points heading into the final race of the season. Febvre got the better jump of the gate and quickly moved into the lead, but Herlings was having none of it, catching and passing Febvre at the midway point. The Dutchman then put fresh air between the two before a late moto mistake saw Febvre crash and finish third, handing Herlings his fifth world title.

Hottest Topic – Eli Tomac switches teams:
In what would have to rank as one of the worst-kept secrets in the history of the sport, four-time 450 champion Eli Tomac has officially moved from Monster Energy Kawasaki to Monster Energy Star Racing Yamaha for 2022. Rumors of the switch began to swirl in early May, shortly before Kawasaki announced that the fruitful partnership between the team and Tomac wouldn’t continue past the end of the year. Still, even though it was a widely accepted (but not 100 percent confirmed) fact, it was another five months before Yamaha pushed ‘go’ on their official media release. Tomac’s switch is by far the biggest of the signing season and, if nothing else, it proved that ‘where there’s smoke there’s usually fire’ as far as the rumor-mill goes.

Greatest Disappointment – Zach Osborne retires:
2020 Lucas Oil Pro Motocross champion, Zach Osborne has been dealing with a back injury that’s steadily worsened over the years. Midway through 2021 he was ready to throw in the towel, but once he began Supercross training things improved enough for him to announce he’d race the 2022 Monster Energy Supercross Championship. That was in October, but things deteriorated so quickly, that a month later he announced he was going to retire from professional racing. After a successful 16-year career and building a reputation as a fierce competitor who never gives up, it was disappointing way to call time, but he’s at peace with his decision and is looking to stay involved in the sport.

Most Surprising Moment – Cameron McAdoo’s crash and bounce-back:
At the Atlanta 2 round of the 250SX championship, Monster Energy Pro Circuit Kawasaki’s Cameron McAdoo suffered a horrific crash that red-flagged the main event. While most racers would’ve limped back to the semi and called it a night, McAdoo somehow remounted, cleared the medics’ concussion checks and lined back behind the gate for the restart. To the incredulity of the announcers and racing fans around the world, McAdoo rode through a world of pain to take the gutsiest podium performance of the year. McAdoo’s heroics at Atlanta 2 won him a tonne of fans and firmly established himself as one of the toughest guys in the sport.

Social Standout – Jett Lawrence:
When it comes to social media, marketing and attracting new eyes to the sport, no-one has done it better than 2021 Pro Motocross 250MX champion, Jett Lawrence. Not only does his social media provide a behind-the-scenes, honest glimpse into the life of a professional athlete, his #jettsonbanner competition for the outdoors and his Jettson OnlyFans day experience at the Pala finale were marketing genius. Jett’s new Flight Plan YouTube series also offers great insight into the lives of the Lawrence family. There’s a reason that this 18-year-old has fast become the fan favorite at every event he turns up to and always attracts the loudest cheers.

Special Mention – Antonio Cairoli:
2021 saw the retirement of one of motocross’ all-time greats, Antonio Cairoli, from professional racing. At 36, the legendary #222 amassed an incredible 94 GP overall victories – including two this year at Matterley Basin and Pietramurata – and nine world championships. As a tribute to his remarkable career, the FIM also retired the 222 plate from competition. The talent, work ethic and racing passion of the Scillian will be greatly missed in the paddock and he’ll leave a huge void in the sport.