'Superior to gasoline equivalents in every single way' Stark Future has underlined an ambitious target of entering the MXGP World Championship by 2023 with its electric-powered ‘Stark Varg’ dirt bike, which has made headlines globally since its unveil this week.

In claiming that ‘electric technology is superior to gasoline equivalents in every single way’, the Stark first production model Stark Varg had been developed to offer multiple bikes in one solution.

It’s said to deliver everything from a 125cc two-stroke through to a 650cc four-stroke via its customizable power settings, boasting an innovative motor, cooling system and battery architecture for unparalleled performance. The power curve, engine braking, flywheel effect and traction control are all adjustable.

Effectively making the Stark Varg ‘the fastest motocross bike on the market’ is a class-leading powertrain producing 80-horsepower at nine HP per kilogram, housed in an ultra-small and light chassis concept constructed from premium materials such as carbon fiber, magnesium and aero grade aluminium. It’s equipped with KYB suspension through Technical Touch. 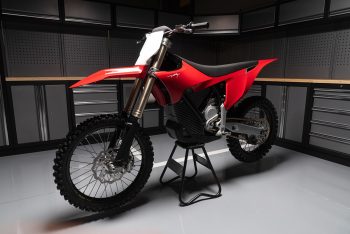 Importantly, the Stark Varg tops the scales at 110kg, featuring a battery range of up to six hours with a charging time of one-to-two hours. Its battery capacity is 6kWh.

With development input from the likes of Josh Hill and Sebastien Tortelli, the goal of lining up in MXGP – pending approval from the federations – has been mooted by tark Future CEO and founder Anton Wass. The Swede also referenced AMA Supercross in his lofty plans.

“Our ambition is to prove our bike is superior by lining up on the start gate with the gas bikes,” Wass told MXlarge. “We want to race in MXGP and AMA Supercross… we are currently talking with federations about that. We would look at doing some races in 2022, but full-time in 2023. Everyone believes the electric bike is the future and our ambition is to race MXGP in 2023.”

According to the launch, Stark Varg models will be competitively priced, costing 11,900 Euros (approx. $13,400 USD). It can be ordered through the Stark Future website at www.starkfuture.com or through select, participating dealerships.