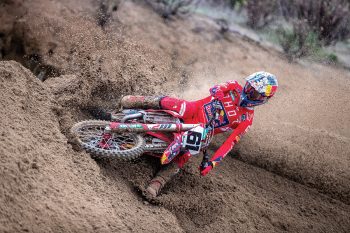 GasGas will enter a new MXGP program in 2022 under the Red Bull GasGas Factory Racing guise, headed by the long-standing De Carli team – formerly one side of the factory KTM organisation – with Jorge Prado, Mattia Guadagnini and Simon Langenfelder on-board.

Entering its third season of world championship competition, GasGas has a youthful roster, led by Prado in MXGP riding a works MC 450F, in addition to Guadagnini and Langenfelder lining up in MX2.

Double MX2 world champion Prado enters his third year in premier class following two testing, yet rewarding, seasons in the category, as Guadagnini approaches 2022 off the back of a successful rookie campaign, securing two GP wins and four overall podiums on his way to P4 in the championship.

“It’s a really special feeling for me as a Spaniard to be competing for GasGas with its Spanish heritage – I can’t wait to start racing in my new colours in February,” Prado explained.

“To begin the season early is perfect for me as I prefer to race and already I feel great on the new bike, so I’m really excited for round one. I’ve learned so much during the last two seasons in MXGP and feel that I can improve my level even more in 2022.

“For sure, it won’t be easy and I’ll be racing against some of the best racers in the world who have much more experience, but I feel ready to battle with them once again. With what I’ve learned during the last two years I believe I can run up front more consistently and I’m excited to get the new season started.”

Langenfelder demonstrated consistency throughout 2021 ending the season P10 in MX2, 2022 marking his third year on MC 250F machinery in his bid to add speed to elevate his string of results to regular top-five finishes. He was already part of the previous Standing Construct GasGas team and will move across to De Carli.

The confirmation of Claudio de Carli’s team to lead GasGas’ MXGP and MX2 world championship bid means the team will end a long-standing stint on KTM machinery, prompting the transition of both Prado and Guadagnini over to the GasGas brand, still within the KTM Group.

Red Bull GasGas Factory Racing team manager de Carli commented: “It is an exciting step and a big honour to be leading GasGas in MXGP next season. With the riders that we have – Jorge, Mattia, and Simon – I strongly believe that we can challenge for both the MXGP and MX2 world championship titles in 2022.

“There are just over two months to go before round one in February and we are already ahead of schedule to be ready for the opening round in the UK. We have three really talented riders and from a technical point of view, I know we have the best bikes out there. It’s the start of a new chapter and the team can’t wait to begin the new season with an all-new look.”

The 2022 MXGP World Championship commences on 20 February at Matterley Basin for the GP of Great Britain.